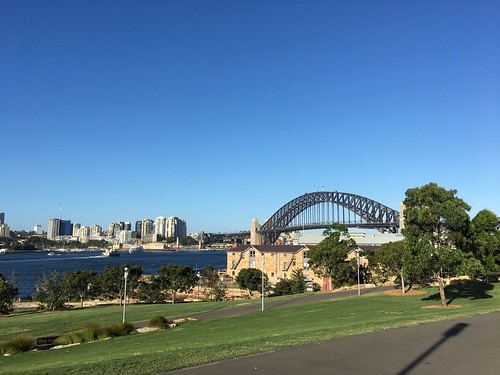 The Sydney Harbour Bridge is a heritage-listed steel through arch bridge across Sydney Harbour that carries rail, vehicular, bicycle, and pedestrian traffic between the Sydney central business district (CBD) and the North Shore. The dramatic view of the bridge, the harbour, and the nearby Sydney Opera House is an iconic image of Sydney, and Australia itself. The bridge is nicknamed "The Coathanger" because of its arch-based design.

Under the direction of Dr John Bradfield of the NSW Department of Public Works, the bridge was designed and built by British firm Dorman Long and Co Ltd of Middlesbrough and opened in 1932.[3][4] The bridge’s design was influenced by the Hell Gate Bridge in New York City.[5] It is the sixth longest spanning-arch bridge in the world and the tallest steel arch bridge, measuring 134 m (440 ft) from top to water level.[6] It was also the world’s widest long-span bridge, at 48.8 m (160 ft) wide, until construction of the new Port Mann Bridge in Vancouver was completed in 2012.

The Sydney Harbour Bridge was added to the Australian National Heritage List on 19 March 2007 and to the New South Wales State Heritage Register on 25 June 1999.

The southern end of the bridge is located at Dawes Point in The Rocks area, and the northern end at Milsons Point in the lower North Shore area. There are six original lanes of road traffic through the main roadway, plus an additional two lanes of road traffic on its eastern side, using lanes that were formerly tram tracks. Adjacent to the road traffic, a path for pedestrian use runs along the eastern side of the bridge, whilst a dedicated path for bicycle use only runs along the western side; between the main roadway and the western bicycle path are two lanes used for railway tracks, servicing the T1 North Shore Line for Sydney Trains.

A close view of Sydney Harbour Bridge at night
The main roadway across the bridge is known as the Bradfield Highway and is about 2.4 km (1.5 mi) long, making it one of the shortest highways in Australia.

One of the nuts that hold the bridge on its abutments; this one is at the north end.

The south-eastern pylon containing the tourist lookout, made of granite quarried at Moruya, NSW
The arch is composed of two 28-panel arch trusses; their heights vary from 18 m (59 ft) at the centre of the arch to 57 m (187 ft) at the ends next to the pylons.

The total weight of the steelwork of the bridge, including the arch and approach spans, is 52,800 tonnes (52,000 long tons; 58,200 short tons), with the arch itself weighing 39,000 tonnes (38,000 long tons; 43,000 short tons). About 79% of the steel was imported from England, with the rest being sourced from Newcastle. On site, the contractors (Dorman Long and Co.) set up two workshops at Milsons Point, at the site of the present day Luna Park, and fabricated the steel into the girders and other required parts.

The bridge is held together by six million Australian-made hand-driven rivets supplied by the McPherson company of Melbourne, the last being driven through the deck on 21 January 1932. The rivets were heated red-hot and inserted into the plates; the headless end was immediately rounded over with a large pneumatic rivet gun.] The largest of the rivets used weighed 3.5 kg (8 lb) and was 39.5 cm (15.6 in) long. The practice of riveting large steel structures, rather than welding, was, at the time, a proven and understood construction technique, whilst structural welding had not at that stage been adequately developed for use on the bridge.

Pylons[edit] At each end of the arch stands a pair of 89 m (292 ft) high concrete pylons, faced with granite. The pylons were designed by the Scottish architect Thomas S. Tait, a partner in the architectural firm John Burnet & Partners.

Some 250 Australian, Scottish, and Italian stonemasons and their families relocated to a temporary settlement at Moruya, NSW, 300 km (186 mi) south of Sydney, where they quarried around 18,000 m3 (635,664 cu ft) of granite for the bridge pylons.[15] The stonemasons cut, dressed, and numbered the blocks, which were then transported to Sydney on three ships built specifically for this purpose. The Moruya quarry was managed by John Gilmore, a Scottish stonemason who emigrated with his young family to Australia in 1924, at the request of the project managers. The concrete used was also Australian-made and supplied from Railton, Tasmania and Kandos, New South Wales.

Abutments at the base of the pylons are essential to support the loads from the arch and hold its span firmly in place, but the pylons themselves have no structural purpose. They were included to provide a frame for the arch panels and to give better visual balance to the bridge. The pylons were not part of the original design, and were only added to allay public concern about the structural integrity of the bridge.

Although originally added to the bridge solely for their aesthetic value, all four pylons have now been put to use. The south-eastern pylon contains a museum and tourist centre, with a 360° lookout at the top providing views across the harbour and city. The south-western pylon is used by the New South Wales Roads and Traffic Authority (RTA) to support its CCTV cameras overlooking the bridge and the roads around that area. The two pylons on the north shore include venting chimneys for fumes from the Sydney Harbour Tunnel, with the base of the southern pylon containing the RMS maintenance shed for the bridge, and the base of the northern pylon containing the traffic management shed for tow trucks and safety vehicles used on the bridge.

In 1942 the pylons were modified to include parapets and anti-aircraft guns designed to assist in both Australia’s defence and general war effort. The top level of stonework was never removed.