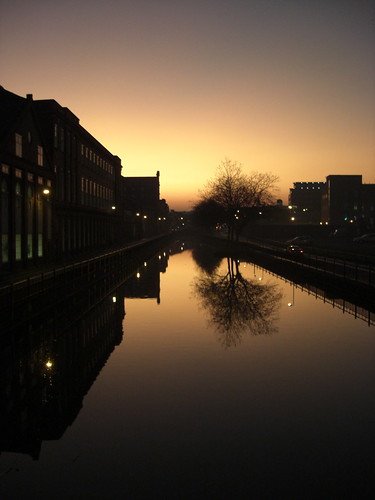 The River Witham in Lincoln, Lincolnshire.

The River Witham is a river almost entirely in the county of Lincolnshire in the east of England. It rises south of Grantham close to South Witham, passes Lincoln and at Boston, flows into The Haven, a tidal arm of The Wash, near RSPB Frampton Marsh. The name "Witham" seems to be extremely old and of unknown origin. Archaeological and documentary evidence shows the importance of the Witham as a navigation from the Iron Age onwards.

From Roman times it was navigable to Lincoln, from where the Fossdyke was constructed to link it to the River Trent. The mouth of the river moved in 1014 following severe flooding, and Boston became important as a port. From 1142 onwards, sluices were constructed to prevent flooding by the sea, and this culminated in the Great Sluice, which was constructed in 1766.

It maintained river levels above Boston and helped to scour the channel below it. The land through which the lower river runs has been the subject of much land drainage, and many drains are connected to the Witham by flood doors, which block them off if river levels rise rapidly.

The river is navigable from Brayford Pool in Lincoln to Boston, with Locks only in Lincoln, at Bardney and at the Grand Sluice. Passage through the Grand Sluice lock is restricted to short periods when the tidal levels are suitable. The river provides access for boaters to the Witham Navigable Drains, to the north of Boston, and to the South Forty-Foot Drain to the south, which was reopened as part of the Fens Waterways Link, a project to link the river to the River Nene near Peterborough. From Brayford Pool, the Fossdyke Navigation still links to the Trent.

Previous 48 hours in Hong Kong – How to maximise your layover
Next Iruya, Salta, Argentina