Breaking News
Home / European / A Winter Holiday in the Sun! Brisbane, River City of the North, Take a Kodak With You.

A Winter Holiday in the Sun! Brisbane, River City of the North, Take a Kodak With You. 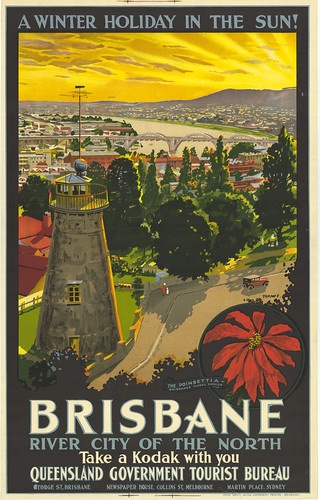 A staff pick from Anna for our favourites album!

Painted design featuring a landscape of Brisbane city including the Old Windmill and features the Poinsettia, Brisbane’s floral Emblem, c 1934

“Percival Albert (Percy) Trompf (1902-1964), commercial artist, was born on 30 May 1902 at Beaufort, Victoria […] Percival joined Giles & Richards, commercial artists in Melbourne, and designed chocolate boxes and wrappings for the confectioners A. W. Allen Pty Ltd. Later, from his studio at Little Collins Street, he painted and designed thousands of advertising posters commissioned by such prominent companies as Bryant & May Pty Ltd and Palmolive Co. Ltd, and by the magazine, Walkabout. His posters for the Australian National Travel Association and the Victorian Government Railways received widespread recognition for their images from nature (seagulls at the beach and crystal creeks at Mount Buffalo), but his most popular posters drew upon historical events (Captain Cook’s landing at Botany Bay and the building of the Sydney Harbour Bridge).
His bright, colourful, optimistic pictures had wide appeal, especially during the Depression. Trompf supervised all stages of production, including the printing; most of his posters were 25 ins by 40 ins (64 cm by 102 cm), but large advertising hoardings required 24 sheets connected in jigsaw fashion.”

Previous Previous Post
Next How to Spend an Epic 3 Days in Quito, Ecuador