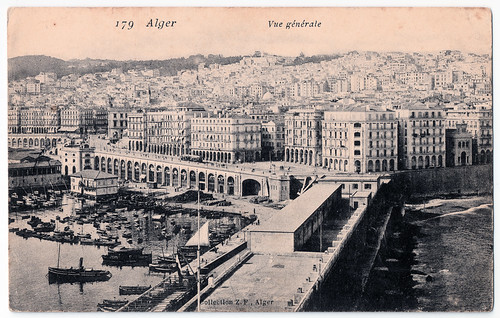 A postcard published by Z.F. of Alger.

Algiers is situated on the west side of a bay of the Mediterranean Sea. The modern part of the city is built on the level ground by the seashore; the old part, the ancient city of the deys, climbs the steep hill behind the modern town and is crowned by the Casbah or Citadel, 122 metres (400 ft) above the sea.

The card was posted in Algiers on Thursday the 16th. August 1906 to:

The message on the divided back of the card was as follows:

"Thursday 16 Aug 1906.
Loading here is dreadfully
slow – there are 900 tons
of cargo still waiting, so I
do not expect to get away
before Sunday at the
earliest.
Dai and myself keep in
fine form, especially the
latter.
It’s still very hot, and there
are mosquitoes galore.
I get a good chance to
practise my French.
Love from Staff".

So what else happened on the day that Staff posted the card to Dolly?

The Prince’s full name was Franz Josef Maria Aloys Alfred Karl Johannes Heinrich Michael Georg Ignaz Benediktus Gerhardus Majella. Let’s hope he didn’t have too many forms to fill in during his lifetime.

During his reign women received voting rights for the first time, following a referendum on the topic (among men only) in 1984.

Franz Joseph was an extremely popular sovereign in Liechtenstein. He was the first ruling prince to live full-time in the Principality. He also oversaw the economic development of Liechtenstein from a poor agricultural backwater into one of the richest countries (per capita) in the world.

Previous The Best Travel, Food and Culture Guides for Phuket, Thailand – Local News & Top…
Next The 11 Most Epic Hikes in Colombia