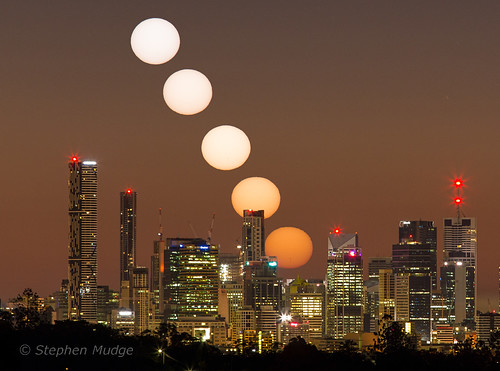 Featured as NASA’s Astronomy Picture of the Day on 5th July 2017:

This image is also being published in the textbook "Next Generation Science: Physics", to be published by Houghton Mifflin Harcourt in 2019.

Earth is at aphelion today, which is the point in its orbit where it is the greatest distance from the sun (and therefore the day on thich the sun appears smallest in the sky). This also coincides with the time of year where the sun rises behind the city buildings as seen from Green Hill Reservoir. So with clear skies forecast, I headed to the reservoir this morning just at the start of astronomical twilight to get some images of the city, and then I took a series of images (about every 3 minutes) through a solar filter as the sun rose. Stacking all these together resulted in this image.