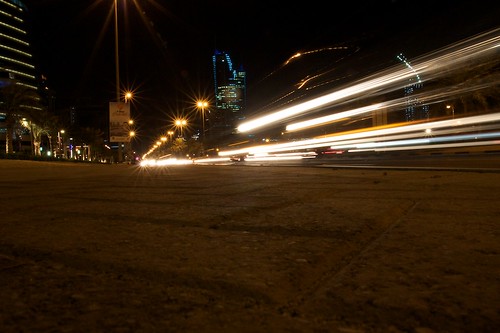 Eos 450D + Tamron 17-50 mm
Bahrain (/bɑːˈreɪn/ ( listen)), officially Kingdom of Bahrain (Arabic: مملكة البحرين‎, Mamlakat al-Baḥrayn, literally: "Kingdom of the Two Seas"), is a small island country in the Persian Gulf ruled by the Al Khalifa royal family. While Bahrain is an archipelago of thirty-three islands, the largest (Bahrain Island) is 55 km (34 mi) long by 18 km (11 mi) wide. Saudi Arabia lies to the west and is connected to Bahrain via the King Fahd Causeway, which was officially opened on 25 November 1986. Qatar is to the southeast across the Gulf of Bahrain.

The planned Qatar Bahrain Causeway will link Bahrain and Qatar as the longest fixed link in the world. Bahrain is also known for its oil and pearls. The country is also the home of many popular structures such as the Bahrain World Trade Center and the Bahrain Financial Harbour, and also the home of many skyscrapers, including the proposed 1,022 m (3,353 ft) high supertall Murjan Tower. The Bahrain International Circuit is also located here, and is the place where the popular Bahrain F1 Grand Prix takes place.
From Wikipedia, the free encyclopedia