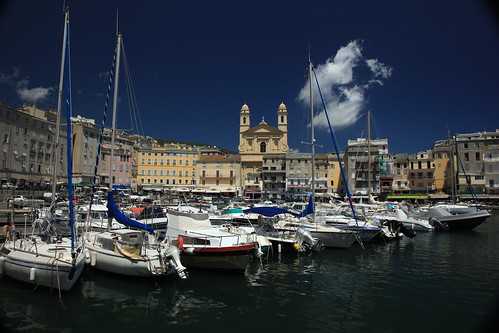 Located in the North-East of Corsica at the base of the Cap Corse, between the sea and the mountain, Bastia is the principal port of the island. The city is located 35 km away from the Northern tip of the Cap Corse, 50 km West from Elba, an Italian island, and 90 km away from continental Italy which can be seen a few days per year when visibility is excellent.

The city of Bastia as seen from the "Pigno": notice the lack of constructions in the foreground and the city along the coast in the background
In terms of geography, Bastia is defined by its position between the sea and the mountain. The city is located on the Eastern side of the "Serra di Pignu", a 960 m high mountain (see photo opposite). This steep mountain and several hills in the city shape a relief typical of the Cap Corse. This pronounced landscape caused the city to develop mostly on a coastal band about 1.5 km wide, which is a very limited part of the 19.38 km² that the commune has.
Above all, Bastia is a port, and the sea has of course a significant role in the spatial organization of the city. Bastia possesses nowadays three different ports. The old port ("Vieux Port" in French and "Porto Vecchio" in Corsican), located in a remarkable and narrow cove, offers good natural shelter against the climatic hazards of the Mediterranean Sea. Thus, it was at the core of the initial development of the city. Nowadays, many pleasure and fishing boats are still there, but it is not as economically vital than the other more modern ports, although its touristic and aesthetic charm almost makes the old port the official emblem of the city. In fact, many cafés, bars and restaurants have moved to its docks to which access is granted by the city for pedestrians only during summer evenings.
A bit more to the North is located the commercial and ferry port. As a major economic asset of the city, the "port de commerce" is the pulse of the city. It is even more so during the summer when ferry arrivals and departures of thousands of passengers and cars can sometimes cause long traffic jams along the North-South axis, the national road RN193. In front of the commercial port, the large Saint-Nicolas square represents the heart of the city. Just North of the commercial port, the Toga marina, named after a city neighborhood, is a harbor for leisure boating activities like sailing and yachting. There are also some bars, restaurants and night clubs on its docks.
Thus, Bastia is logically organized on a relatively narrow North-South axis which can make access to the city center difficult under particular circumstances. Nowadays, the city center is mainly composed of the "citadelle", the stronghold, also called Terra-Nova, with the Genoese Governors’ Palace, the old port and its popular quarter and the market plaza, and finally the ensemble of buildings along the "Boulevard Paoli", the main commercial street of the city, which lies from the Justice Court to the Avenue Maréchal Sebastiani.
Durings the last few decades, Bastia and its region have experienced a strong demographic growth, which has cause somewhat of a suburban crawl in the South of the city, because of the congestion of the city center.
[edit]Climate
Bastia possesses a Mediterranean climate. The average annual temperature is 15.5°C and there are about five days of frost per year. Winds are frequent and violent, precipitation copious, but there are also 240 sunny days on average per year

Previous Eat Like a Local in Seoul, South Korea
Next The capital of Chile is Santiago and has over 16 million people in population. T…