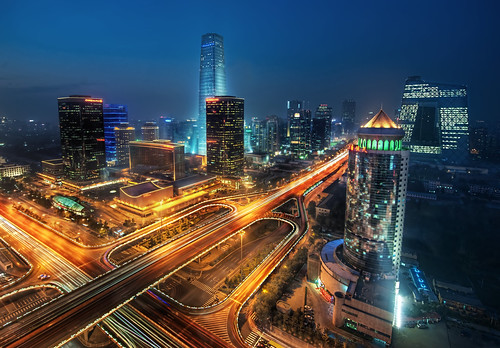 Getting this photo was not easy at all!

I knew of this area of Beijing called the CBD, or Central Business District. I notice that they have all these catchy names here, much like the building I took this photo from: "China Merchants Building." At any rate, I had the driver circle the business district a few times so I could find a good angle. We found one in this building, but did not know if we could take a photo from the top floor. Woo went in first. This might have been a mistake because during the shoot he admitted he had a dreadful fear of heights. But he said it in such a charming British accent I thought it could have been my subconscious.

We went up to the 32nd floor. No windows no dice. We then went to the 31st floor, but the confused secretary would not let us through. Then we tried 30. The secretary said yes and let us into a boardroom, but the angle was not right and the other offices were busy. So we went to 29.

The secretary on 29 was confused so I instructed Woo to tell her, firmly, "We are with the Government."

Find out what happened here at stuckincustoms.com.