Castle in the Sky: The Municipal Building 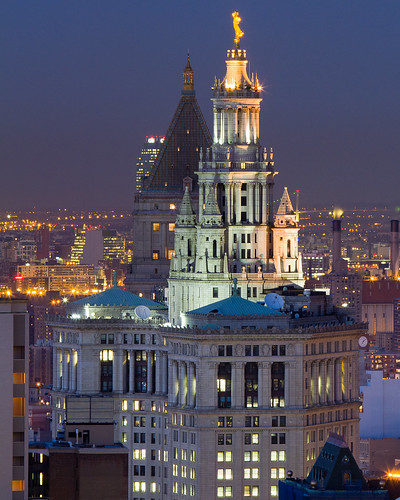 The love the alignment of the Municipal Building, the Thurgood Marshall Federal Courthouse and One Court Square in Queens. Quite simply, this is my favorite building in New York City. This is one of my first shots with my 70-200 4 IS and I am very satisfied with its performance (it is almost prime sharp).

"…an imposing building of real beauty…. one of the few monumental skyscrapers of the early part of the Twentieth Century."
— NYC Landmarks Preservation Commission, in its 1966 designation decision

The limestone building incorporates Roman, Italian Renaissance and Classical styles of architecture. A major feature in the design is an open plaza, screened by Corinthian columns, that appears to be carved out of the first three stories of the structure. The plaza flows into a central triumphal arch, inspired by the Arch of Constantine. So grand is the arch that automobile traffic flowed through it before Chambers Street traffic patterns were altered. Today, the barrel-vaulted passageway is open to foot traffic.

The building’s soaring classical exterior rises from modern roots: the Municipal Building was the first building in New York City to incorporate a subway station at its base. The subway station entrance at the south end of the building is covered by an arcaded plaza notable for its dramatic vaults of Guastavino tile construction.

Surmounting the central tower is a 20-foot tall gilded statue,"Civic Fame," fashioned by sculptor Adolph Weinman. Constructed of sheets of copper with a hollow core, this female figure stands barefoot on a sphere and wears a flowing dress and a crown of laurels to signify glory. In her left hand she holds out a five-pointed crown representing the five boroughs (Manhattan, Brooklyn, Bronx, Queens and Staten Island).