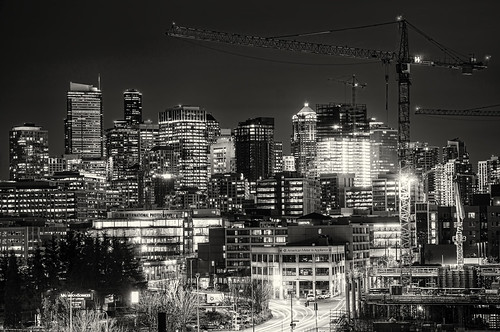 In the last eight years, one trait about Seattle that hasn’t changed is its growth in population, which is reflected by the multiple construction sites located throughout the city — new condos, new apartments, new office towers, new headquarters, etc.

Of course, construction is most evident in the central business district. In the eight years I have lived here, I have witnessed the face of the skyline change before my eyes (and my camera lenses). Although the cranes located at their construction sites are temporary until their new building is completed, there is little argument to counter that cranes are virtually permanent and ubiquitous fixtures when one views the Seattle skyline.

I have heard several people have ongoing debates on just how many cranes are present in downtown Seattle on any given day. No one agrees typically, but the sum usually falls between between 17 and 30. Naturally, this depends on the location from which one views the skyline.

Meanwhile, the city is two years behind in all the activity taking place underground with the new tunnel burrowing underneath the downtown core. Such is the nature of a city constantly in flux.