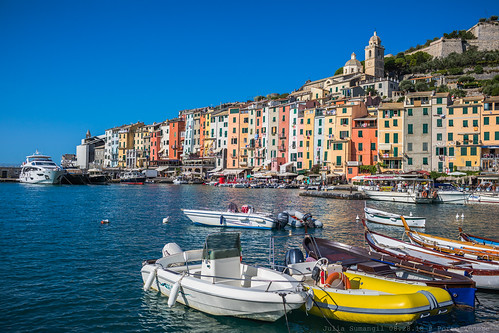 The ancient Portus Veneris is believed to date back to at least the middle of the 1st century BC. It has been said that the name refers to a temple to the goddess Venus which was sited on the promontory where the church of Peter the Apostle now stands. The name has also been linked to that of the hermit Saint Venerius. In Roman times the city was essentially a fishing community.

After the fall of the Western Roman Empire, Porto Venere became the base of the Byzantine fleet in the northern Tyrrhenian Sea, but was destroyed by the Lombards in 643 AD. Later, it was a frequent target of Saracen raids. First indications of the existence of a castle date from 1113, and in 1161 the walls were erected. Porto Venere became a fiefdom of a family from Vezzano before passing to Genoa in the early 12th century. In 1494, it suffered a devastating bombardment from the Aragonese fleet during their war with Genoa: subsequently the old part of the town declined in importance, giving way to the development of the Borgo Nuovo ("New District"), which had existed from 1139 and is centred on the church of St. Peter.

On 2 December 1797, after the French established their domination in Italy, the town became part of the Department of the Gulf of Venus, with the capital in La Spezia, in the Ligurian Republic annexed to the First French Empire. From 28 April 1798 with the new French law, the territory of Portovenere fell in the seventh canton, as the capital, the Jurisdiction of the Gulf of Venus since 1803 and the main center of the third State of the Gulf of Venus in the jurisdiction of the Gulf of Venus. From 13 June 1805 to 1814 it was included in the Department of the Apennines. It was at this point which, in 1812, it became part of the coastal route called "Route Napoleon" in honor of the French general and now known as localized road 530, which still connects the marine center with La Spezia via Fezzano, Le Grazie and Terizzo.

In 1815 it was incorporated in the Kingdom of Sardinia, according to the decisions of the Congress of Wien of 1814, and subsequently in the Kingdom of Italy from 1861. From 1859 to 1927 the territory was included in the First district of La Spezia, part of the Eastern District of the Province of Genoa before and, with the establishment in 1923, the Province of La Spezia then. Source: en.wikipedia.org/wiki/Porto_Venere