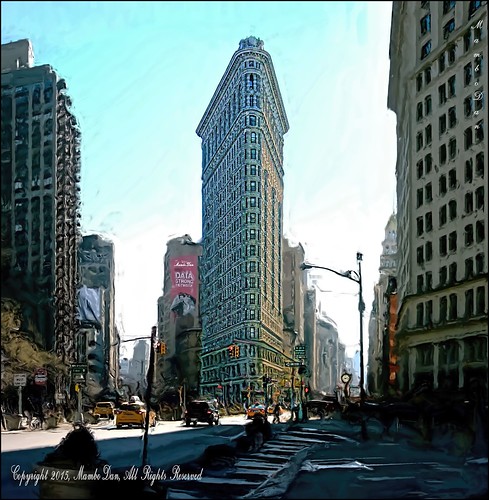 The Flatiron Building was designed by Chicago’s Daniel Burnham as a vertical Renaissance palazzo with Beaux-Arts styling. Unlike New York’s early skyscrapers, which took the form of towers arising from a lower, blockier mass, such as the contemporary Singer Building (1902–1908), the Flatiron Building epitomizes the Chicago school conception: like a classical Greek column, its facade – limestone at the bottom changing to glazed terra-cotta from the Atlantic Terra Cotta Company in Tottenville, Staten Island as the floors rise – is divided into a base, shaft and capital.

Early sketches by Daniel Burnham show a design with an (unexecuted) clockface and a far more elaborate crown than in the actual building. Though Burnham maintained overall control of the design process, he was not directly connected with the details of the structure as built; credit should be shared with his designer Frederick P. Dinkelberg, a Pennsylvania-born architect in Burnham’s office, who first worked for Burnham in putting together the 1893 World’s Columbian Exposition in Chicago, for which Burnham was the chief of construction and master designer. Working drawings for the Flatiron Building, however, remain to be located, though renderings were published at the time of construction in American Architect and Architectural Record.

Construction phases
Building the Flatiron was made feasible by a change to New York City’s building codes in 1892, which eliminated the requirement that masonry be used for fireproofing considerations. This opened the way for steel-skeleton construction. Since it employed a steel skeleton – with the steel coming from the American Bridge Company in Pennsylvania – it could be built to 22 stories (285 feet) relatively easily, which would have been difficult using other construction methods of that time. It was a technique familiar to the Fuller Company, a contracting firm with considerable expertise in building such tall structures. At the vertex, the triangular tower is only 6.5 feet (2 m) wide; viewed from above, this pointed end of the structure describes an acute angle of about 25 degrees.

The "cowcatcher" retail space at the front of the building was not part of Burnham or Dinkelberg’s design, but was added at the insistence of Harry Black in order to maximize the use of the building’s lot and produce some retail income to help defray the cost of construction. Black pushed Burnham hard for plans for the addition, but Burnham resisted because of the aesthetic effect it would have on the design of the "prow" of the building, where it would interrupt the two-story high Classical columns which were echoed at the top of the building by two columns which supported the cornice. Black insisted, and Burnham was forced to accept the addition, despite the interruption of the design’s symmetry. Another addition to the building not in the original plan was the penthouse, which brought the building to 21 floors. It was constructed after the rest of the building had been completed to be used as artists’ studios, and was quickly rented out to artists such as Louis Fancher, many of whom contributed to the pulp magazines which were produced in the offices below.

New York’s Flatiron Building was not the first building of its triangular ground-plan: aside from a possibly unique triangular Roman temple built on a similarly constricted site in the city of Verulamium, Britannia, the Maryland Inn in Annapolis (1782), the Gooderham Building of Toronto (1892), and the English-American Building in Atlanta (1897) predate it. All, however, are smaller than their New York counterpart.

Sur le Flatiron, Albert Gleizes, gouache and ink (1916)
The facade of the Flatiron Building was restored in 1991 by the firm of Hurley & Farinella.