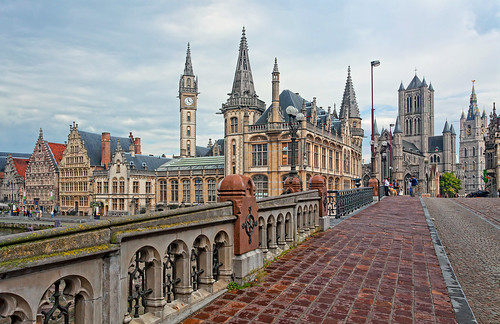 As early as the 11th century, Flemish cloth production had reached such a scale that the supply far exceeded the local demand. As a result, Ghent cloth became an important export article all over Europe. Originally, indigenous wool was used from the many flocks of sheep kept in Artois or on the salt lands and salt marshes of the newly enclosed Flemish polder land. Very soon, however, the raw material gained on the spot was no longer sufficient. From 1100, more and more wool merchants bought their supplies in England. In particular, Lincolnshire wool was of top quality and some of the abbeys had a significant source of revenue thanks to the large flocks of sheep with wool destined exclusively for Flanders. The wool was imported to Bruges and Ghent via the Zwin. The final product, fabricated in Ghent, was fine and durable, but also most valuable. It was sold on all the major West European markets, and even in Nowgorod (a Russian trade centre), in the countries around the Mediterranean Sea, and further in the Near East via Islamic ports. Ghent became the most important textile centre of the known world and, with 65,000 inhabitants, the second city in North Western Europe after Paris.
Throughout its history, Ghent has always been a gateway to the world and has played an active part on the international scene. For example, the people of Ghent will gladly tell the English that King Edward III of England was also proclaimed King of France on the Vrijdagmarkt (Friday Market) during the Hundred Years War. His son, John of Gaunt, founding father of the Lancasters, was born in Ghent. They will tell the Dutch that no less than five Ghent nobles were the authoritative captains of the formidable Watergeuzen fleet during the second half of the 16th century; or that Willem de Key, architect of Leiden Town Hall and the ‘Waag’ and ‘Vleeshalle’ in Delft, was also of Ghent origin. They will proudly guide French visitors to the Hotel d’Hane Steenhuyse in Veldstraat, where King Louis XVIII of France sought refuge for a hundred days after the return of Napoleon from Elba. The Americans and the British know that the hostilities between both nations were put to an end by the ‘TREATY OF GHENT’ which was signed on Christmas Eve in 1814. The World Exhibition of 1913 was intended to put Ghent amongst the modern cities of the 20th century, but the two World Wars dampened this fervour.
Citizens of Ghent have also played important parts outside Europe. Mexico still honours Pedro de Gante (Peter of Ghent) as one of the founding fathers of modern civilisation in Latin America. In about 1700, a large group of immigrants from Ghent contributed to the foundation of Santo Domingo, capital of the Dominican Republic. This was also the case for the city of Ghent in the State of Minnesota, USA. Moreover, would you believe it, one of the region’s most famous specialities is Ghent Waterzooi !