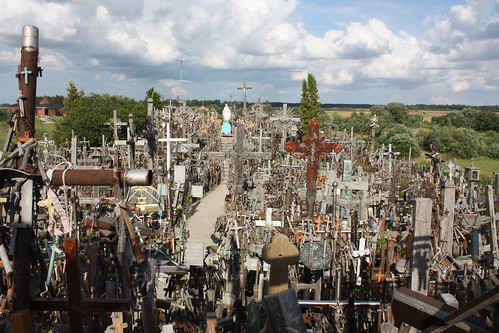 The Hill of Crosses (Lithuanian: Kryžių kalnas) is a site of pilgrimage about 12 km north of the city of Šiauliai, in northern Lithuania. The precise origin of the practice of leaving crosses on the hill is uncertain, but it is believed that the first crosses were placed on the former Jurgaičiai or Domantai hill fort after the 1831 Uprising. Over the generations, not only crosses, but giant crucifixes, carvings of Lithuanian patriots, statues of the Virgin Mary and thousands of tiny effigies and rosaries have been brought here by Catholic pilgrims. The exact number of crosses is unknown, but estimates put it at about 55,000 in 1990 and 100,000 in 2006.