Hypin’ Up the Holidays, Seattle Style 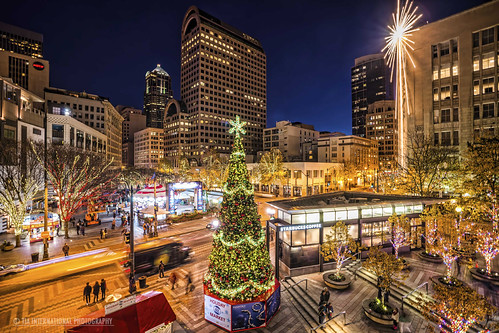 It’s that time of year once again.

Here in Seattle each year, the city’s official Christmas tree sparkles at the intersection of 4th Avenue and Pine Street at Westlake Center.

Macy’s dons its gigantic star at the corner of its huge department store. This year, all the star’s lights beam beautifully. (In previous years, it has not been fully operational).

The carousel across the street in Westlake Park carries kids and parents around and around while shoppers treat themselves to the warm mini donuts a few feet away. These treats actually taste as good as they smell, but buy one small bag, share it with a friend, and move on quickly — they’re sinfully yummy!

A few horse carriages come and go providing couples and small families a whimsical tour of our city centre. People are noticeably carrying around more coffee cups, shopping bags, and one another, rather than cell phones (a bit of a nod to a culture more familiar in the 20th century).

The mood is jovial, bubbly, and abuzz. It’s how Seattle hypes up the holiday season, and this photographer loves to capture the magical moments.

Wishing you all a very merry holiday season, regardless of any particular faith. I can’t believe 2014 is nearly done and gone.