Breaking News
Home / European / Image from page 28 of “Lima; or, Sketches of the capital of Peru, historical, statistical, administrative, commercial and moral” (1866)

Image from page 28 of “Lima; or, Sketches of the capital of Peru, historical, statistical, administrative, commercial and moral” (1866) 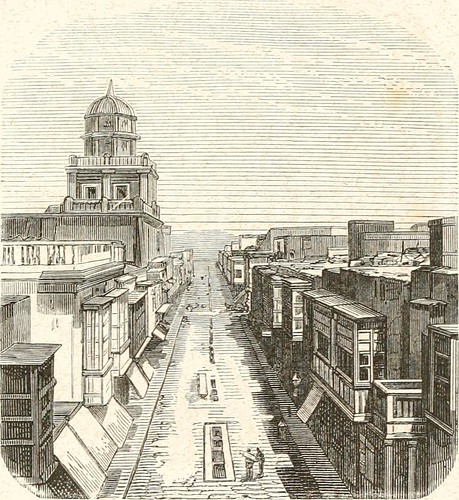 Click here to view book online to see this illustration in context in a browseable online version of this book.

Text Appearing Before Image:
J ■) > 11 1 ■> 1 COO o CD LIMA. 5 Earlliquahes, — Lima is exposed to strong shocks, ^^hicll havemore than once left it a heap of rnins. These phenomena occurmost frequently hetween spring and summer, hut are not altogetherunkno^vn in autumn. The shocks usually pass from south to northsfollowing the direction of the chain of mountains. Among theearthquakes which have caused the greatest ravages may he espe-cially mentioned tliose of 1630, 1687, 1746, 1806, and 1828. Onan average there are eight in a year. Streets. —The thoroughfares of Lima are well laid out, andpresent a pleasing aspect to the eye; some of them, however, aredisfigured by open sewers, by a want of uniformity in the exterior of

Text Appearing After Image:
View of the Calle de las Manias (now de Callao). the edifices, and by the system of Moorish balconies which was in-troduced by the Spaniards. Though most of the wooden lattices whichused to give these balconies the appearance of bird-cages have re-cently been replaced by glazed windows, the unequal height oftheir heavy masses, projecting at least three feet from the wall,assuredly does not contribute to the beauty of the streets. 6 LIMA. Pi/.arro, on plaiiiiiiig Ihe city, assigned lots of building-ground tothe first foundcis, who, on account of their limited number, builtunl three short streets, the first being that ^^hich runs by the sideof the cathedral, called Calle dc lus Judios (Jew-street). There are no^v three hundred and fiftv-six of these streets, ex-elusive of thoroughfares which have been laid out, but as yet haveno buildings in them. The streets do not run in the direction ofthe four cardinal points, but Ihey are quite straight and intersecteach other at right angles, for

Note About Images
Please note that these images are extracted from scanned page images that may have been digitally enhanced for readability – coloration and appearance of these illustrations may not perfectly resemble the original work.