Breaking News
Home / European / Image from page 388 of “Marvels of the new West : a vivid portrayal of the stupendous marvels in the vast wonderland west of the Missouri River : comprising marvels of nature, marvels of race, marvels of enterprise, marvels of mining, marvels of stock-rai

Image from page 388 of “Marvels of the new West : a vivid portrayal of the stupendous marvels in the vast wonderland west of the Missouri River : comprising marvels of nature, marvels of race, marvels of enterprise, marvels of mining, marvels of stock-rai 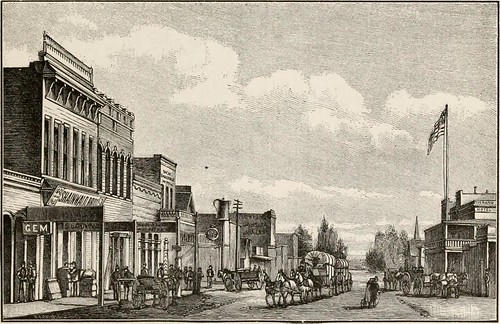 Click here to view book online to see this illustration in context in a browseable online version of this book.

Text Appearing Before Image:
ue Shining Mountains, all of which are synonymous.I do not know from which of the Indian tongues the two words Ida-ho come. I think, however, if you will pursue the inquiryamong those familiar with the Nez Perce, Shoshone, and Flat Headtribes, that you will find the origin of the two words as I have givenit above. MARVELS OF ENTERPRISt.. 347 Boise City was two hundred and fifty miles from the nearest rail-road station until three years ago, and could be reached only by along and wearisome journey by stage or team for days and nights.To travellers it was a desolate region, through which they journeyed toreach the little thrifty city which pluck and enterprise had reared atthe mouth of Boise River, from which its name was derived. The business part of the town is built of brick and stone, a cityordinance prohibiting the erection of wooden buildings. A businessof more than $200,000 monthly is done by the citizens. There arethree excellent hotels, more than twenty stores of all kinds, and

Text Appearing After Image:
BOISE CITY. three newspapers, — two of them weekly, and the other tri-weekly.The streets are wide, and so shaded with trees as to appear beautifulbeyond comparison. Hence the name by which the place is known,— Wooded City. One of the writers already quoted says : There is land enough inthe neighborhood for all who choose to come. The history of thepast twenty years of this valley shows what energy and determina-tion can accomplish in the face of almost insuperable obstacles.With these obstacles now removed, and with the valley easily accessi-ble by rail to the immigrant seeking a home and the capitalist an in-vestment for his money, the growth of the next few years must be fargreater and more marked than at any period in the past. Boise valley 348 MARVELS OF THE NEW WEST. ||llllluilli!i||lliiiiiiimim|im||||ii|i||ii|ii|iiiHiiimi(iiii{i|i|iiiiniiiiii:i in i a niiii

Note About Images
Please note that these images are extracted from scanned page images that may have been digitally enhanced for readability – coloration and appearance of these illustrations may not perfectly resemble the original work.

Previous Biafra independent state map-en.svg
Next Punta del Este: beaches and art mansions on the coast of Uruguay | Things to do, where to stay