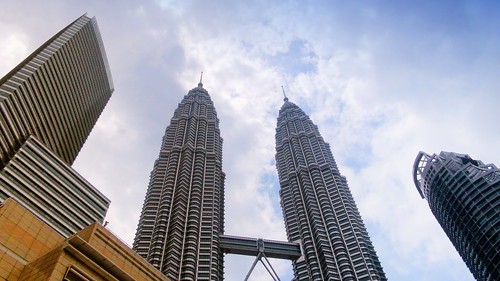 PETRONAS TWIN TOWERS
Used to be the tallest buildings in the world in 1998 for 6 years until 2004. Currently, it still holds the record for the tallest twin buildings in the world. 452 meter in height. It is the headquarters of Petronas, the state owned oil company and also the largest company in South East Asia.
The towers and the mall below it was designed by Argentinian born architect César Pelli. Construction started in 1991 and completed 7 years after, in midst of Asian Financial Crisis and Reformasi movement. Due to the soil conditions on the tower, the buildings were built on one of the deepest foundations in the world.
The 88-story towers were built using mostly reinforced concrete, with steel-and-glass facade to resemble Islamic motifs, a religion followed by the majority of Malaysia. The cross section of the tower resembles Rub el Hizb, further solidifies the Islamic motif in the tower design.
Biggest attraction of course a visit to the sky bridge or the observation deck of the Petronas Twin Towers for 80 Malaysian Ringgits you get to go up….. – the locals pay 20 RInggits. It is a bit annoying that westerners/tourists are exploited for entrance fees at such a rich oil company venture …… Only 1200 people are admitted a day.
The Petronas Towers feature a diamond-faceted facade consisting of 83,500 square metres (899,000 sq ft) of stainless steel extrusions. In addition, a 33,000-panel curtain wall cladding system resides within the towers. While the stainless steel element of the towers entices the illustrious sun, highlighting the magnificent towers, they are composed of 55,000 square metres (590,000 sq ft) of 20.38-millimetre (0.802 in) laminated glass to reduce heat by reflecting harmful UV rays.
On the top of each tower is a pinnacle standing 73.5 metres (241 ft) tall. The pinnacles were more than just the finishing touches to the height of the towers, while the pinnacles may seem to be an aesthetic feature of the towers to enhance their presence and height, they also play function to aircraft warning lights and are an essential element to the overall Islamic minaret design that the towers embody.
The interiors of the towers highlight the Malaysian cultural inspiration to the design through traditional aspects such as fabric and carvings typical of the culture, specifically evident in the foyer of the entrance halls in the towers.
The construction of the Petronas Towers turned out to be a multinational effort. The structural design engineers worked out of New York City, while the wind-tunnel consultants and elevator design engineers were from Canada. In order to meet local safety construction codes, the towers had to be able to withstand 65 miles per hour (105 km/h) winds. In order to assure this requirement would be fulfilled the engineers tested the towers twice within a wind tunnel, first by computer simulation and second by building an actual model of the towers.
The inspiration of architect César Pelli is rooted in the tradition of the culture and the Islamic symbols including the geometric eight-pointed star floor design,[23] the inspiration is mainly from Malaysia’s own ambition and aspiration. As evident in Pelli hoping the skybridge would symbolize a gateway to the future.

KLCC – KUALA LUMPUR CITY CENTRE
is a multipurpose development area in Kuala Lumpur, Malaysia. The area is located around Jalan Ampang, Jalan P. Ramlee, Jalan Binjai, Jalan Kia Peng and Jalan Pinang.
Designed to be a city within a city, the 100-acre site hosts the tallest twin buildings in the world, Suria shopping mall, hotels, office buildings and several hotels. A public park and a mosque is also built on the area and open to everyone.
There are two hotels in the KLCC area. Mandarin Oriental is the main hotel which sits between Suria KLCC and Kuala Lumpur convention center, the Traders hotel, which is owned by Petronas and is run by Shangri-La Hotels, it connects directly with the convention center.