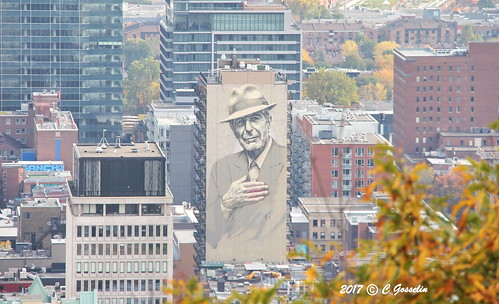 By artist Gene Pendon (aka Gene Starship). The mural is under completion.

Leonard Norman Cohen CC GOQ (September 21, 1934 – November 7, 2016) was a Canadian singer, songwriter, musician, poet, novelist, and painter. His work explored religion, politics, isolation, sexuality, and personal relationships. Cohen was inducted into the Canadian Music Hall of Fame, the Canadian Songwriters Hall of Fame, and the Rock and Roll Hall of Fame. He was a Companion of the Order of Canada, the nation’s highest civilian honor. In 2011, Cohen received one of the Prince of Asturias Awards for literature and the ninth Glenn Gould Prize.

Cohen was born on September 21, 1934 in Westmount, Quebec, an English-speaking area of Montreal, into a middle-class Canadian Jewish family. His mother, Marsha (Masha) Klonitsky was the daughter of a Talmudic writer, Rabbi Solomon Klonitsky-Kline, of Lithuanian Jewish ancestry.His paternal grandfather, whose family had moved from Poland to Canada, was Lyon Cohen, the founding president of the Canadian Jewish Congress. His father, Nathan Cohen, owned a substantial clothing store and died when Cohen was nine years old. The family observed Orthodox Judaism, and belonged to Congregation Shaar Hashomayim, to which Cohen retained connections all his life. On the topic of being a Kohen, Cohen told Richard Goldstein in 1967, "I had a very Messianic childhood. I was told I was a descendant of Aaron, the high priest."

This photo and all those in my Photostream are protected by copyright. No one may reproduce, copy, transmit or manipulate them without my written permission.