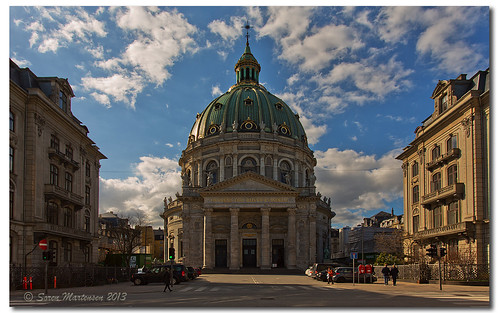 I am doing all the touristy things at the moment……….. visiting all the famous Danish castles, churches and places, really enjoying it as it’s more than six years since I was home last.

Went for a walk through Copenhagen and of course had to have a look at Amalienborg and the Marble Church as well.

From Wikipedia, the free encyclopedia
The church was designed by the architect Nicolai Eigtved in 1740 and was along with the rest of Frederiksstaden, a district of Copenhagen, intended to commemorate the 300 years jubilee of the first coronation of a member of the House of Oldenburg.

Frederick’s Church has the largest church dome in Scandinavia with a span of 31m, though there are three larger domes elsewhere in Europe. The dome rests on 12 columns.[1] The inspiration was probably St. Peter’s Basilica in Rome.

The foundation stone was set by king Frederick V on October 31, 1749, but the construction was slowed by budget cuts and the death of Eigtved in 1754. In 1770, the original plans for the church were abandoned by Johann Friedrich Struensee. The church was left incomplete and, in spite of several initiatives to complete it, stood as a ruin for nearly 150 years.

In 1874, Andreas Frederik Krieger, Denmark’s Finance Minister at the time, sold the ruins of the uncompleted church and the church square to Carl Frederik Tietgen for 100,000 Rigsdaler — none of which was to be paid in cash — on the condition that Tietgen would build a church in a style similar to the original plans and donate it to the state when complete, while in turn he acquired the rights to subdivide neighboring plots for development.

The deal was at the time highly controversial. On 25 January 1877, a case was brought by the Folketing at the Court of Impeachment (Danish: Rigsretten), Krieger being charged with corruption over this deal. He was, however, eventually acquitted.