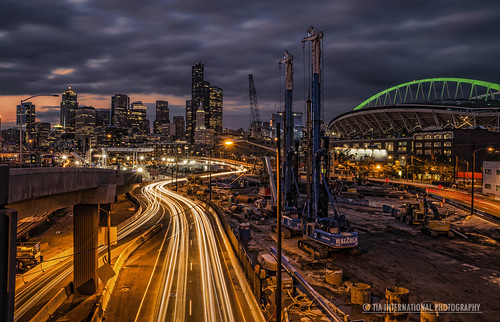 Seattle’s cosmetic surgery continues near the waterfront. This portion of Highway 99 (SR99), which was once part of the bilevel Alaskan Way Viaduct, continues to be redesigned and rerouted as construction demolishes the ground underneath for the new tunnel that will replace the viaduct in a few years. As a result, every couple of months since 2011, either slight or significant alterations are made to change the course of the highway itself.

Typically not your most attractive scene, the onset of what appeared to be a massive thunderstorm (that did not happen) coupled with the last hues of sunset made the scene look beautiful, yet chaotic, futuristic, and even apocalyptic in a manner best portrayed in science-fiction novels and movies.

For comparison, here is what this scene looked like back in April 2011, before any construction took place.