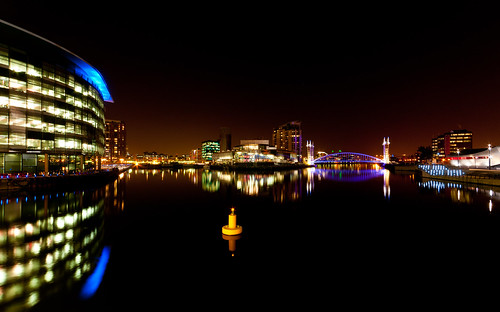 Media City UK is a 200-acre (81 ha) mixed-use property development site at Salford Quays on the banks of the Manchester Ship Canal in Salford and Trafford, England. The project is being developed by Peel Media, and its principal tenants are media organisations. The land occupied by the development was part of the Port of Manchester.

The BBC signalled its intention to move jobs to Manchester in 2004, and the Salford Quays site was chosen in 2006. The Peel Group was granted planning permission to develop the site in 2007, and construction of the development, with its own energy generation plant and communications network, began the same year. Based in Quay House, the principal tenant will be the BBC, whose move marks a large-scale decentralisation from London. BBC Children’s, BBC Radio 5 Live, BBC Research and BBC Sport are among the departments scheduled to relocate to the development. ITV’s Granada division plans to move from its Granada Studios to MediaCityUK in 2012. The Studios on Broadway house seven high-definition studios, claimed to be the largest such facility in Europe.

MediaCityUK is to be developed in two phases. The 36-acre (15 ha) first phase was completed in 2011, and the second is dependent on its success. The Manchester Metrolink was extended to MediaCityUK with the opening of the MediaCityUK Metrolink station on 20 September 2010,[1] and further extensions are planned. Road access was improved by the construction of Broadway Link Road.

Traditional street names are not used in the development. The main thoroughfares are styled blue, white, pink, yellow, orange, purple and green where street furniture and coloured ambient lighting will be colour-coded to match. A stylised map of the site has been devised. Landscape architects, Gillespies regenerated the brownfield site to create public spaces.[28] The focal point is a piazza and landscaped park, which stretches to the ship canal around which the buildings are located. The piazza’s two distinct areas, The Green and The Stage are capable of holding events for up to 6500 people.[29] In front of The Studios are the foundations for a free-standing big screen, which will be viewable from the piazza when it has been commissioned.[30]

Construction of the BBC Centre at MediaCityUK in February 2010The BBC will occupy three buildings: Bridge House, Dock House, and Quay House, all designed by architects Wilkinson Eyre. With simple forms intended to harmonise with their waterfront settings, the buildings provide 450,000 square feet (42,000 m2) of accommodation.[31]

Quay House is the BBC’s 135,000-square-foot (12,500 m2) main building from where BBC Breakfast, Match of the Day, BBC Radio Manchester, North West Tonight and BBC Radio 5 Live will be broadcast.[32] Bridge House will be where Blue Peter, Mastermind, Dragons Den and BBC Bitesize are produced.[32] Dock House will contain the BBC’s Research and Religion and Ethics departments.[32] Orange is an 11-storey building, designed by architects Sheppard Robson. It is a glazed structure with four types of cladding, including one made of folded aluminium in a diamond pattern. It will house departments from Salford University and on seven floors, staff from ITV Granada.[33][34] The Studios on Broadway,[35] contain seven high-definition studios, claimed by Peel Media to be the largest such facility in Europe.[36] The largest has an area of 12,500 square feet (1,160 m2), making it one of the biggest in western Europe.[18] Fitting began in 2010 at a cost of £22 million, in time for the BBC’s move in summer 2011.[37] The seven studios vary in size; the large studios are on the ground floor, and the smaller studios on the first floor. The larger of two audio studios, sitting on hydraulic jacks to insulate it from noise generated in the surrounding studios, is dedicated to the BBC Philharmonic Orchestra.[38] The studio block contains offices and the glass-fronted, 16-storey Holiday Inn hotel.[39] The Pie Factory occupies the former Freshbake factory, which after closing in 2006, was converted by Peel Media into a TV, film and commercial production facility. The bakery’s facilities were renovated into three sound stages, anxilliary and office space. It opened in 2007 and was the first working studio complex at MediaCityUK.[38][40] The Greenhouse designed by architects Stephenson Bell, is a refurbished three-storey office block that has been converted into small, flexible office suites for small companies in the media and creative industries.[21] The Heart and NumberOne are the residential elements of the development, providing 378 apartments in two tower blocks. TheHeart is a 22-storey apartment building on the quayside and NumberOne, another 22-storey building, is next to the studio facilities.[From Wikipedia