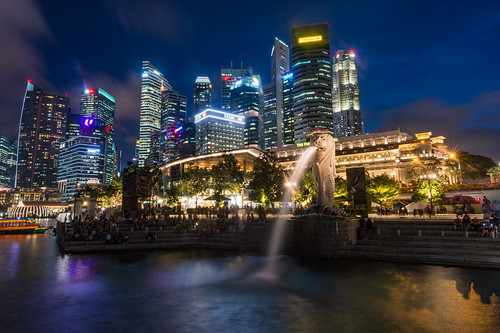 From Wikipedia; The Merlion (Malay: Singa-Laut) is a well-known marketing icon of Singapore depicted as a mythical creature with a lion’s head and the body of a fish. It is widely used as a mascot and national personification of Singapore.

The symbol was designed by Alec Fraser-Brunner, a member of the Souvenir Committee and curator of the Van Kleef Aquarium, for the logo of the Singapore Tourism Board (STB) in use from 26 March 1964 to 1997 and has been its trademarked symbol since 20 July 1966. Although the STB changed their logo in 1997, the STB Act continues to protect the Merlion symbol. Approval must be received from STB before it can be used. The Merlion appears frequently on STB-approved souvenirs.

Together with the Little Mermaid of Denmark and Manneken Pis of Belgium, the Singapore Merlion is ranked in Japan as the ‘Three Major Disappointments of the World’. This meme was played out in episode 6 of the anime series A Place Further Than The Universe, when two of the characters expressed to their chagrin that the Merlion was not as disappointing as they thought.