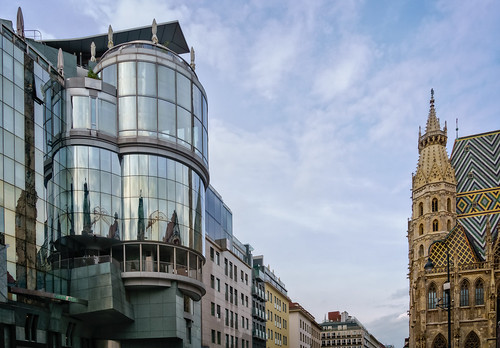 The Haas Haus at the Stock-im-Eisen-Platz in Vienna.

Designed by the Austrian architect Hans Hollein, it is a building in the postmodernist style and was completed in 1990. The use of the Haas-Haus is divided between retail and a restaurant. The building is considered controversial owing to its contrast with the adjacent Stephansdom cathedral.

The Haas Haus with its reflective façade looking at the Stephansdom at the end of the Graben was built by Austria′s star in contemporary architecture, Hans Hollein, in 1989. Once highly controversial, the Viennese now accept that the building is there and stopped complaining about this modern piece. The architect aimed to quote the alignment of the Roman fortifications that once ran along the Graben here.

Emporis defines the style as modernism. I have my doubts. Isn’t it a fine example of postmodernism?