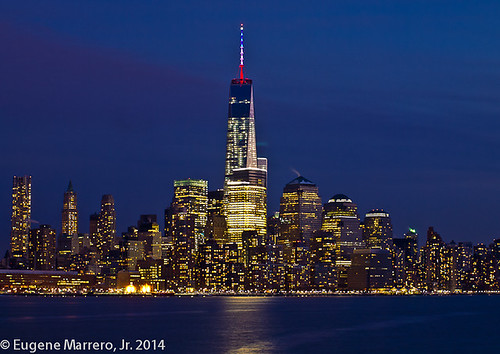 The spire of One World Trade Center was lit in patriotic red, white and blue celebrating Presidents Day 2014. The spire was first lit for testing on November 9, 2013 as it the building awaited the final ruling on whether it would be recognized by the 30 member height committee of the nonprofit Council on Tall Buildings and Urban Habitats based in Chicago which incidentally is the home of the former Sears Tower, now Willis Tower which was the tallest building in this hemisphere and Chicago is recognized as the location of the World’s first skyscraper in 1884. The matter in question? Whether One World Trade Center Spire forms an integral part of the buildings aesthetic design as opposed to addendum broadcast antenna that could be added or removed. The original design called for the communication mast or spire to be clad with decorative fiberglass and steel. The developer who took over the project when it initially stalled, moved and made crucial decisions on roadblocks that stalled the project. The two most controversial were removing “Freedom Tower” as the official name and the second, foregoing the decorative fiberglass and steel cladding as it was determined it would be impossible with current technology to repair and maintain reasonably with current means.
So the nonprofit Council on Tall Buildings and Urban Habitats decided in favor the One World Trade Center, that it’s 408 foot mast was an intergral part of the building, so the building’s 1,368 foot height plus the 408 foot spire give the building the height of 1776 feet, the tallest building in the Western Hemisphere beating out Chicago’s own Willis Tower which is 1,450 feet without its antennas which were ruled as the broadcast type. Though the former 110 Story Sears Tower does have the highest occupied floor versus the 104 story One World Trade Center.