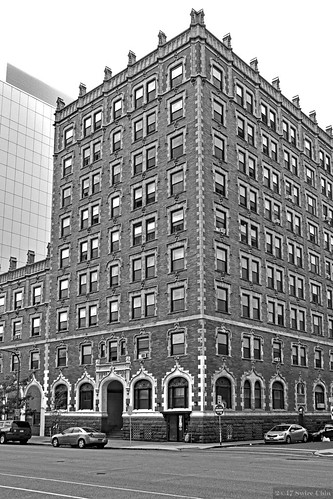 Once the Hotel Touraine, now the Touraine Apartments.

Converted to residential apartments in 1982.

Over the Canadian Thanksgiving/ Columbus Day (in the U.S.) long weekend, I met up with Eridony (Brandon) in Buffalo, New York. It was the third time that Brandon and I met up.

Buffalo is a city in western New York state on the eastern shore of Lake Erie, it’s located about 17 miles (27 kms) south of Niagara Falls. During the 19th century and up to the 1950s, Buffalo was a boom town and a major industrial and transportation hub due to its location along the Erie Canal, railroads and Lake Erie. Between the 1860s and 1910s, Buffalo actually ranked as the top 10 largest cities in the U.S. (Thanks for that info, Brandon!) During that period, Buffalo built many impressive public and private buildings, many of which have survived till today.

Buffalo had suffered decades of economic and population decline, but in the past ten years, appears to be recovering very slowly.