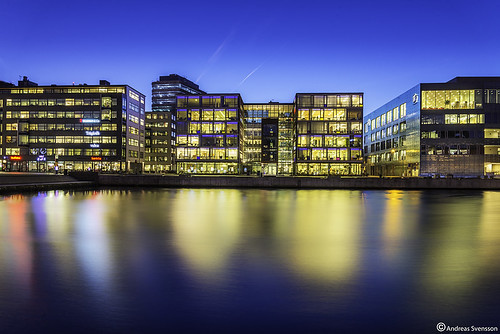 Since Hurricane is built on land owned by the City of Malmö and is very visible to the people of Malmö, close to Central Station, has thought a lot about the building’s appearance. Hurricane’s exterior is glass, green variegated with large windows. The facade is decorated with words and phrases in different languages. They have been developed by the School of Arts, Culture and Communication (K3) the Director. The idea is that the individual should pause to contemplate and reflect.

The words that adorn the facade is divided into three parts. The first part is a quote taken from Malmo-born poet Hjalmar Gullberg’s poem "Only real words" and from Malmö rapper Timbuktu’s song "A Letter". The second part reflects Malmö University’s international links, with the words "knowledge" and "freedom" in different languages. The third part is a number of words such as "listening mind talk," "integrity sense of self pride," "pleasure seriously," "empathy aspect sighted" and "brotherhood sisterhood humanity." The letters, which are 30 inches high, is made of stainless steel and is placed inside the glass. All words and phrases on the facade changes expressions depending on the hours of the day, weather, and their own movements.

The building is meant to be used by any other tenant of the university would not want to be left after 20 years. Therefore Hurricane simple in its structure, the surfaces inside are large and airy. The ceiling height varies from 3, 6 and 8 meters. The major premises of the hurricane’s auditorium for 400 people, auditorium for 200 people, a lecture room for 100 people and sports hall for 100 people. The hurricane actually consists of six buildings that are built with five courtyards between. The building has five floors. It is 150 meters long and 60 meters wide.

Hurricane won the urban price [clarify] in 2006, when it has become a symbol for Malmö University and in addition to the city’s transformation.