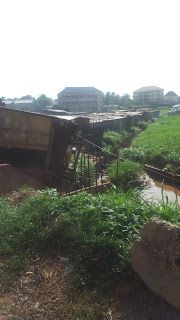 Pending Fulani herdsmen attack as Gov. Obiano builds slum in Awka By Okechukwu Onuegbu In the midst of Awka Capital territory stands this slum or resettlement area where some old or faded corrugated roofing sheets were used to construct houses and markets. This residence is situated on a drainage system and erosion prone area along Onitsha/Enugu Expressway by Kwarter junction (beside Parktonia hotel). Always on the lips of every keen observer is Who leased or sold this less than 1 kilometer expanse of land to residents of this slum many of whom are suspected not to be Nigerians but of Chad and Niger Republic origin. News48hrs.com observed that there is constant electricity power supply borehole toilets stalls pathways including refuse dumps among others signifying presence of occupants in the area. According to Abubakar Hakuna one of the residents of the slum the illegal estate is called ngwa Hausawa and it has well-structured leaders like Sarki and Islamic scholars and mosques. Speaking to News48hrs.comunder the condition of anonymity a staff of Awka Capital Territory Development Authority (ACTDA) disclosed that the agency was aware that ngwa Hausawa is in existence and was working out modalities to relocate its occupants to a decent location and avoid possible break down of law and order. We have constituted investigative panel comprising leaders of Hausa community and other stakeholders to ensuring that there will be no crisis when they would be relocated. We learnt that those people were made to pay some cash to some top individuals before they were allowed to settle there. That is why we are trying to resolve it amicably the source added. News48hrs.com visited the office of the MD/CEO ACTDA Arc Michael Okonkwo thrice without being able to see him for comments on fledgling slum in the middle of the capital city. Feature news Special reports

Previous SabMiller needed to spread the word about its soft drink made from guarana, the …
Next Mapa de Tuvalu