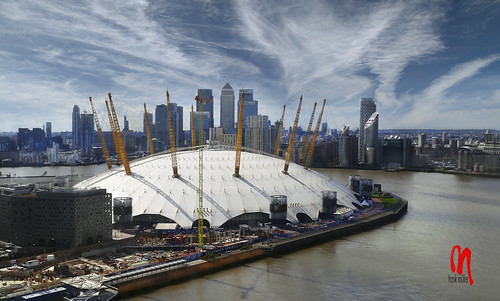 Great Britain, London, Millennium Dome on the River Thames in Greenwich, referred to simply as "The Dome".
The massive construction official name is "The O2". The Dome was initiated originally used to house the Millennium Experience, a major exhibition celebrating the beginning of the third millennium. The central structure is time being the largest dome in the world & is nearly twice the area of the former record holder, the Georgia Dome in Atlanta, U.S., it is the eighth-largest building in the world by usable volume & has become among one of the United Kingdom’s most recognizable landmarks.

The canopy as the roof is made of PTFE coated glass fibre fabric, a durable & weather-resistant plastic. The dome, which were completed in mid 1998, create an interior floor area of more than 80,000 square mtr. The roof measures 320 mtr in diameter, with a total extension of some 90,000 square mtr, reaching a maximum height of 52 mtr. in the middle, 1 mtr for each week. The roof assembly is supported by a web of 2,600 cables suspended from a circle of 12 steel masts, inclined slightly from vertical, that rise nearly 100 metres, designed by architect Sir Richard Rogers.

The structure was then sold in December 2001& in 2007 the renovated building, which included a 20,000-seat auditorium, reopened as "The O2"; it was named after a mobile phone company.

👉 One World one Dream,
🙏…Danke, Xièxie 谢谢, Thanks, Gracias, Merci, Grazie, Obrigado, Arigatô, Dhanyavad, Chokrane to you & over
12 million visits in my photostream with countless motivating comments