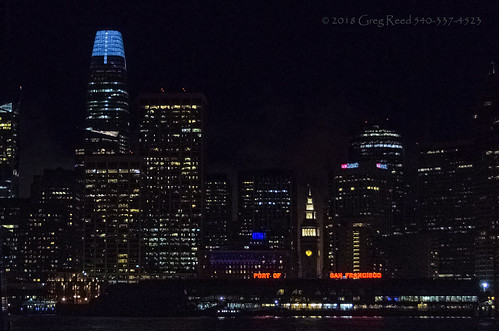 The Port of San Francisco lies on the western edge of the San Francisco Bay near the Golden Gate. It has been called one of the three great natural harbors in the world, but it took two long centuries for navigators from Spain and England to find the anchorage originally called Yerba Buena: a port, as was said in its early days, in which all the fleets of the world could find anchorage.[1]

The port area under the Commission’s control comprises nearly eight miles of waterfront lands, commercial real estate and maritime piers from Hyde Street on the north to India Basin in the southeast. The list of landmarks under port control include Fisherman’s Wharf, Pier 39, the Ferry Building, AT&T Park (formerly SBC Park and Pacific Bell Park), located next to China Basin and Pier 70 at Potrero Point. Huge covered piers on piles jut out into San Francisco bay along much of the waterfront, bordered by the Embarcadero roadway. In 2015, the City, acting through the Port of San Francisco, launched the San Francisco Seawall Earthquake Safety and Disaster Prevention Program (Seawall Program).

The first landing place on the north-eastern tip of the San Francisco peninsula was a rocky promontory below Telegraph Hill later known as Clarke’s Point that jutted into the San Francisco Bay at the line of what is now Broadway and Battery Streets. Yerba Buena Cove swept inland from the subsequently named Clarke’s Point to as far as Montgomery Street to the west, and further south and east to Rincon Point at the south of Market area at the foot of Folsom and Spear streets.

The founding padres of Mission Dolores and the other northern California missions found the jetty at Clarke’s Point a convenient landing for their commerce in hides and tallow. It is the same location where Russian ships anchored to load supplies of meat and grain. Early European visitors were the British Raccoon in 1814 and the French frigate Artemise in 1839. The sloop USS St. Louis, which arrived in 1840, was the first warship to fly the American flag in San Francisco Bay. On July 9, 1846, the sloop USS Portsmouth gave a 21-gun salute and Captain John Berrien Montgomery and his detachment rowed ashore and hoisted the American flag on the Mexican flagpole in the small settlement’s plaza, later named Portsmouth Square in honor of the ship.

The earliest development of a port in San Francisco, two and a half miles east of the Presidio, was under the Mexican regime, begun in 1835 as the town of Yerba Buena. Before this time, the port at Monterey was considered the official port of entry to California.

Captain Richardson erected the first abode of a European on the hill overlooking the Bay. He became the first harbor master by appointment of the Governor Mariano Guadaloupe de Vallejo. Whalers took umbrage at the taxes charged by the Mexican governor Manuel Micheltorena in 1843, and the outright banning of their trading in the port, then relocated from San Francisco to the Hawaiian Islands.

Commodore John D. Sloat claimed California for the United States on July 7, 1846, during the Mexican–American War, and Captain John B. Montgomery arrived to claim Yerba Buena two days later. In 1847, the first American alcalde, Lt. Washington Allon Bartlett changed the name from Yerba Buena to San Francisco, "so that the town may have the advantage of the name given on the public map."

The United States governor of the newly occupied territory of California, General Stephen W. Kearny, renounced the rights of eminent domain of the American government in favor of the city of San Francisco.[clarification needed] The early city built up on the west side of Yerba Buena Cove around Portsmouth Square.

Immediately, the municipality of San Francisco was given the right, by General Kearney acting as governor of California, to sell "water lots" in the tidelands between Clarke’s Point and Rincon Point so the city might gain revenues from the sale. At the same time, the owner of the land at the foot of Telegraph Hill, W. S. Clarke built a timbered wharf and the location became known as Clarke’s Point. Later, a substantial wharf 750 feet (229 m) long and 60 feet (18 m) wide was erected to the depth of water, 26 feet (8 m), made the landing available to deep water ships. this project was followed by other wharves built below Broadway and Clay streets, and at Commercial street.

When gold was discovered in California, the first hulk of an old iron revenue steamer, the James K. Polk, was beached at the foot of the bluff near Clarke’s Point and became the foundation of the first real passenger landing in the city. It was at this site that the population of San Francisco met the Pacific mail liner the Oregon to receive the official announcement that California had been admitted to the Union. The bluff at the point was quickly leveled and on the land created a wharf was built that became the first regular berthing place, for a short time, for the Pacific mail steamships. Whatever products came to California, and whatever California produced, had to be carried by ship. In the first year of the gold rush, hundreds of ships were beached and abandoned in the tidal flats of Yerba Buena Cove, and numerous ships were run aground to become parts of the city itself. In 1853, the Vallejo Street wharf lease was granted, and a larger wharf was built.

In the ensuing years, the state legislature passed bills concerning the sale of water lots and authorizing the city to construct wharves beyond its boundary and to set wharfage rates. The battles over control of the waterfront, water lots, and docking privileges began. The great Central Wharf was built in 1849, named for the central wharf in Boston, and was located where Commercial street is now. Eventually a huge forest of masts from a fleet of abandoned vessels filled Yerba Buena Cove. By 1851, the Central Wharf had ten times more business offered than it could handle, and many new wharves were struck into the bay, including those at Market, Sacramento, Washington, California, Clay, Jackson and Pacific Streets. The filling of Yerba Buena Cove and extensive corruption and legislation led to a period, during the gold rush, when major portions of the city were built on water lots, reclaimed by hook or by crook, on pile driven and rough planking overlain. Early San Francisco was a wharf city of planks and sheds and subject to devastating fires. Half the early city was built on trembling wharves and the scrub and sandy hills were not appreciated, amongst them only a few abodes and scattered tents were found. The early wharves and their buildings fell into the bay and by 1857, the waterfront was a jumble of abandoned ships and rickety piers. Businesses looked for more solid facilities.

Two wharves of notice projected out into the bay from the foot of Taylor street; McMahon’s Wharf, and Meiggs Wharf. They had "T" and "L" shaped extensions, the former was a landing for wood and charcoal. The latter, after Harry Meiggs absconded, became the landing for the ferry to Sausalito.

Merchant’s (or Cousin’s) Dock built and repaired ships at the site that is now Kearney and Bay streets, but it was swallowed up when a new location for the Seawall was established along the cure that is now the Embarcadero. Merchant’s Drydock was moved to the foot of Harrison and the company established floating drydocks at Hunter’s Point. The North Point dock at the north side of Telegraph Hill was built in 1853 and became the landing site for immigrant ships from Italy and France. Numerous other wharves, privately built and owned, stretched along the northern waterfront; Flint’s, the India docks, Cowell’s, Shaw’s, Law’s, Buckelew’s, Cunnigham’s and the Long Wharf. Many of these wharves were on city lands that might be filled at any time, and most disappeared with the building of the Seawall and the modern piers built into the early twentieth century. Amidst intense disputation over ownership and litigation unparalleled in the history of any port in the world, the establishment of the Board of State Harbor commissioners created a San Francisco waterfront as a separate institution by law, having no connection to the city government and indirectly controlled by the state.

Until the 1860s, supplies could also be delivered up Mission Creek by boat to the vicinity of Mission Dolores.