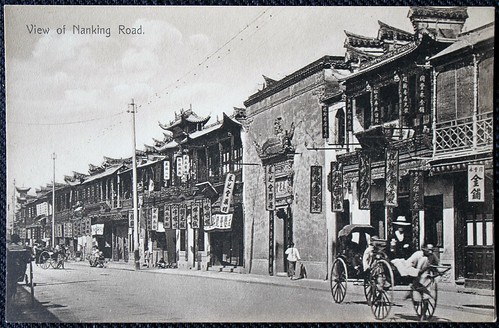 Charles Gesner van der Voort had started his career in Rotterdam, at Holland-China Trading Company (HCHC). In 1938, he went to Shanghai for the firm. The Japanese interned him, and most other Dutch nationals, from 1943-45. In camp, he met his wife Nancy and they married after the war. After a leave in The Netherlands, they returned to the Orient, where Charles continued to work for HCHC in Hong Kong.

The History of Nanjing Road can be traced back to the year 1845. At that time it was called "Park Lane", which stretched from the Bund to He’nan Road. In 1854, it was extended to Zhejiang Road, and eight years later, once more extended to Xizang Road. In 1862, it was named formally "Nanking Road" by the Municipal Council, which administered the International Settlement. In Chinese it was usually referred to as the Main Road (大马路). Around 1930 it was a bustling street with at least one reported casino (probably at nr. 181). In 1943 the International Settlement was annulled, and after World War 2 the government changed its name from Nanking Road to "East Nanjing Road", meanwhile they also renamed the former Bubbling Well Road "West Nanjing Road", and the general name of the two roads became "Nanjing Road", comprising five kilometres total length.

At the beginning of the 20th century, eight big department stores were established along the street. A series of franchised stores were also set up at that time.

On 23 August 1937 a bomb was dropped on Nanjing Road by a Chinese plane in an attempt to lighten its load while being pursued by Japanese planes. The bomb hit two department stores, killing 612 people and injuring another 482.

In 2000, as a part of the development plan held by the local government, Nanjing Road was renovated to be a characteristic pedestrian street. The width is about 28 meters and the total length is 1,200 meters, which extends from Middle He’nan Road to Middle Xizang Road.

In 2007, the Jing’an and Huangpu governments agreed to coordinate their policy to enhance the development of Nanjing Road, through a unique launching of a committee. This agreement followed a request by the committee of Champs-Elysees in the perspective of a friendship agreement between both famous streets.”

Robert Koo provided me with translations of the texts on the shops. “The building toward the right side was a fairly large jewelry store. Next to the jewelry store (large white wall) was a Chinese pharmacy store. Many smaller shops were the garment/clothing stores from the middle to the end of the photo.”