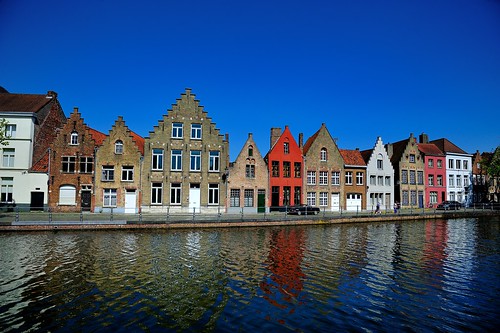 Bruges in English French and Catalonian; Brugge in Dutch, Brügge in German and Brujas in Spanish is the capital and largest city of the province of West Flanders in the Flemish Region of Belgium. It is located in the northwest of the country.

Along with a few other canal-based northern cities, such as Amsterdam, it is sometimes referred to as "The Venice of the North". Bruges has a significant economic importance thanks to its port. At one time, it was the "chief commercial city" of the world.

Very few traces of human activity in Bruges date from the Pre-Roman Gaul era. The first fortifications were built after Julius Caesar’s conquest of the Menapii in the first century BC, to protect the coastal area against pirates. The Franks took over the whole region from the Gallo-Romans around the 4th century and administered it as the Pagus Flandrensis. The Viking incursions of the ninth century prompted Baldwin I, Count of Flanders to reinforce the Roman fortifications; trade soon resumed with England and Scandinavia.

Bruges received its city charter on July 27, 1128, and new walls and canals were built. Since about 1050, gradual silting had caused the city to lose its direct access to the sea. A storm in 1134, however, re-established this access, through the creation of a natural channel at the Zwin. The new sea arm stretched all the way to Damme, a city that became the commercial outpost for Bruges.

Bruges had a strategic location at the crossroads of the northern Hanseatic League trade and the southern trade routes. Bruges was already included in the circuit of the Flemish and French cloth fairs at the beginning of the 13th century, but when the old system of fairs broke down the entrepreneurs of Bruges innovated. They developed, or borrowed from Italy, new forms of merchant capitalism, whereby several merchants would share the risks and profits and pool their knowledge of markets. They employed new forms of economic exchange, including bills of exchange (i.e. promissory notes) and letters of credit. The city eagerly welcomed foreign traders, most notably the Portuguese pepper and spice traders.
With the reawakening of town life in the twelfth century, a wool market, a woollens weaving industry, and the market for cloth all profited from the shelter of city walls, where surpluses could be safely accumulated under the patronage of the counts of Flanders. The city’s entrepreneurs reached out to make economic colonies of England and Scotland’s wool-producing districts. English contacts brought Normandy grain and Gascon wines.

Hanseatic ships filled the harbor, which had to be expanded beyond Damme to Sluys to accommodate the new cog-ships. In 1277, the first merchant fleet from Genoa appeared in the port of Bruges, first of the merchant colony that made Bruges the main link to the trade of the Mediterranean. This development opened not only the trade in spices from the Levant, but also advanced commercial and financial techniques and a flood of capital that soon took over the banking of Bruges. The Bourse opened in 1309 (most likely the first stock exchange in the world) and developed into the most sophisticated money market of the Low Countries in the 14th century. By the time Venetian galleys first appeared, in 1314, they were latecomers. Numerous foreign merchants were welcomed in Bruges, such as the Castilian wool merchants who first arrived in the 13th century. The foreign merchants expanded the city’s trading zones. They maintained separate communities governed by their own laws until the economic collapse after 1700.

Such wealth gave rise to social upheavals, which were for the most part harshly contained by the militia. In 1302, however, after the Bruges Matins (the nocturnal massacre of the French garrison in Bruges by the members of the local Flemish militia on 18 May 1302), the population joined forces with the Count of Flanders against the French, culminating in the victory at the Battle of the Golden Spurs, fought near Kortrijk on July 11. The statue of Jan Breydel and Pieter de Coninck, the leaders of the uprising, can still be seen on the Big Market square. The city maintained a militia as a permanent paramilitary body. It gained flexibility and high prestige by close ties to a guild of organized militia, comprising professionals and specialized units. Militia men bought and maintained their own weapons and armour, according to their family status and wealth.

At the end of the 14th century, Bruges became one of the Four Members, along with Franc of Bruges, Ghent and Ypres. Together they formed a parliament, however they frequently quarrelled amongst themselves.

In the 15th century, Philip the Good, duke of Burgundy, set up court in Bruges, as well as Brussels and Lille, attracting a number of artists, bankers, and other prominent personalities from all over Europe. The weavers and spinners of Bruges were thought to be the best in the world, and the population of Bruges grew to 200,000 inhabitants at this time.

The new Flemish-school, oil-painting techniques gained world renown. The first book in English ever printed was published in Bruges by William Caxton. This is also the time when Edward IV and Richard III of England spent time in exile here.

Starting around 1500, the Zwin channel, which had given the city its prosperity, also started silting. The city soon fell behind Antwerp as the economic flagship of the Low Countries. During the 17th century, the lace industry took off, and various efforts to bring back the glorious past were made. During the 1650s, the city was the base for Charles II of England and his court in exile.[17] The maritime infrastructure was modernized, and new connections with the sea were built, but without much success, as Antwerp became increasingly dominant. Bruges became impoverished and gradually faded in importance; its population dwindling from 200,000 to 50,000 by 1900.

The symbolist novelist George Rodenbach even made the sleepy city into a character in his novel Bruges-la-Morte, meaning "Bruges-the-dead", which was adapted into Erich Wolfgang Korngold’s opera, Die tote Stadt (The Dead City)

In the last half of the 19th century, Bruges became one of the world’s first tourist destinations attracting wealthy British and French tourists. By 1909 it had in operation an association called ‘Bruges Forward: Society to Improve Tourism.’ After 1965 the original medieval city experienced a renaissance. Restorations of residential and commercial structures, historic monuments, and churches generated a surge in tourism and economic activity in the ancient downtown area. International tourism has boomed, and new efforts have resulted in Bruges being designated ‘European Capital of Culture’ in 2002. It attracts some 2 million tourists annually.

The port of Zeebrugge was built in 1907. The Germans used it for their U-boats in World War I. It was greatly expanded in the 1970s and early 1980s and has become one of Europe’s most important and modern ports.