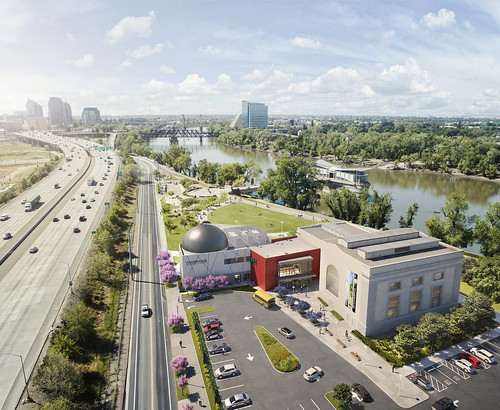 Dreyfuss + Blackford Architecture’s design for the Powerhouse Science Center re-envisions a historic riverfront structure as a hub for science education, exploration and promotion in the City of Sacramento. On the banks of the Sacramento River, the Science Center grows out from an abandoned power station building. As a principal component of the Riverfront activation, the Powerhouse Science Center anchors Robert T. Matsui Waterfront Park and borders the southern terminus of the 32-mile American River Bike Trail.

Vacant for over half a century, the structure undergoes a complete historic rehabilitation and the construction of a new floor level inside. A new two-story addition projects from the east side, containing a lobby, classrooms, offices and a cafe. A 110-seat planetarium is prominently on display with a zinc-clad hemispheric dome rising above the building’s mass. As representation of our place in the universe, the facade and building mass is sectioned by multiple planes, creating continuous vector lines that extend across the building and site. From satellites to world landmarks, the lines form connections with local and global points of interest.