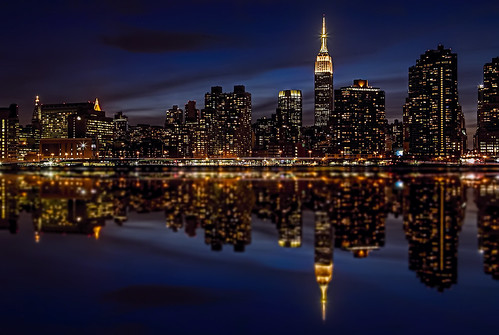 Seen here is a reflective East River night view of the Midtown Manhattan Skyline — as viewed from Gantry Plaza State Park. This is the 6th shot in the series from GPSP.

Some quick info about the park itself (published along w/ each of the shots):

Gantry Plaza State Park runs along the banks of New York’s East River, and offers many beautiful views of the NYC skyline — including the Empire State, Chrysler, and MetLife buildings, as well as the new WTC tower.

There are several ‘Long Island’ gantries found throughout the park, as this area was once a dock facility used to load and unload rail-car floats. The gantries were refurbished during the park’s construction, and are now centerpieces of the area.

Railroad tracks once connected these floats to the Long Island Rail Road, and aided in the transport of shipments to and from various industries as far back as the mid-1920s.*

*Credit to Wikipedia for the brief GPSP history lesson.

In the interest of full disclosure, the skyscraper reflections shown here are not the original reflections cast in the East River that evening. As you probably suspected, there is a bit of digital chicanery in those NYC waters. I was experimenting w/ the reflections in Photoshop, and this image is the final result of my attempts to add some additional detail to the water.
PAC