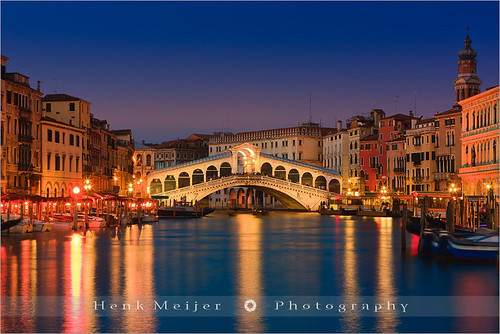 The Rialto Bridge is the most famous of the bridges that cross the Grand Canal. In this area, which originally housed the food market, there has always been a canal crossing, at first, a simple bridge of boats, and later a real wooden bridge, made from two inclined ramps with a mobile section in the middle, in order to allow the passage of ships.
The current Rialto Bridge, a stone arch, was constructed under the supervision of Antonio da Ponte, between 1588 and 1591. The construction was made difficult by the conditions of instability and by the height of the sea bottom. The structure, very similar in style to the previous wooden bridge, is formed by two inclined ramps, with shops on each side, covered by a portico.
{Source:}

Back from Venice. Classic Rialto Bridge shot during blue hour.
Perfect weather during the day lead to clear skies at the end of the day.
Enjoy…

Image is under Copyright by Henk Meijer.
Contact me by email if you want to buy or use my photographs.

Previous The 10 Best Weekend Trips in South Korea
Next How to spend 24 hours in Asuncion, Paraguay