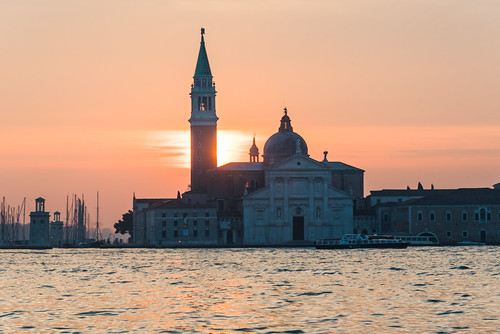 Viewed from a vaporetto on the Grand Canal, the Church of San Giorgio Maggiore is a 16th-century Benedictine church on the island of the same name in Venice, designed by Andrea Palladio, and built between 1566 and 1610. The church is a basilica in the classical renaissance style and its brilliant white marble gleams above the blue water of the lagoon opposite the Piazzetta and forms the focal point of the view from every part of the Riva degli Schiavoni.

The façade is brilliantly white and represents Palladio’s solution to the difficulty of adapting a classical temple facade to the form of the Christian church, with its high nave and low side aisles, which had always been a problem. Palladio’s solution superimposed two facades, one with a wide pediment and architrave, extending over the nave and both the aisles, apparently supported by a single order of pilasters, and the other with a narrower pediment (the width of the nave) superimposed on top of it with a giant order of engaged columns on high pedestals. On either side of the central portal are statues of Saint George and of Saint Stephen, to whom the church is also dedicated.