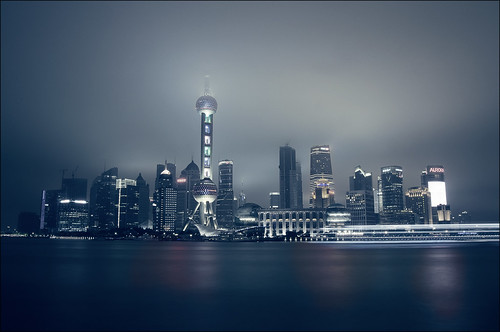 This was taken from the Bund, across the Huangpu river. It is a beautiful part of town which almost looks like a city in France (the part I’m standing in, not the view). The Bund was colonized a while ago by the Europeans, which is why all the architecture looks European.

The view here is of the famous Shanghai skyline of the Pudong (the streaks you see to the right are the lights from a cruise ship passing by). The tower is a television tower. Most of the buildings are relatively new, from what I understand. The dark tower in the back rising above the cloud line is the stock exchange.

It is staggering how much Shanghai has developed in just a few years. I’ve never ever seen such rapid development happen anywhere before. Say what you may want to say about China (civil rights issues, communism, etc), but it is clearly where the future is. They’re doing so many things right and leaving other countries well behind. They have strong leadership and a devoted people that take a lot of pride in their country and are willing to do anything for it. They are hard workers and are really an example to the world.

On a separate note, I’m back from my tiring, hectic travels over the last two months which took me to Europe (Portugal, Spain, UKx2), Asia (China), and all over the US. It’s been busy.

Previous Touring Beijing’s Forbidden City Without Fights or Faints – Around the World “L”
Next Paramaribo, Suriname