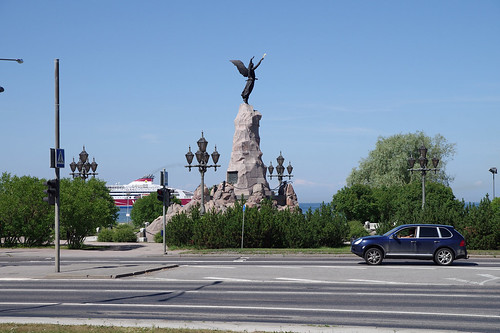 The Russalka Memorial (Estonian: Russalka mälestussammas) is a bronze monument sculpted by Amandus Adamson, erected on 7 September 1902 in Kadriorg, Tallinn, to mark the ninth anniversary of the sinking of the Russian warship Rusalka, or "Mermaid", which sank en route to Finland in 1893. It was the first monument in Estonia made by an Estonian sculptor. The monument depicts an angel holding an Orthodox cross towards the assumed direction of the shipwreck. The model for the angel was the sculptor’s housekeeper Juliana Rootsi, whose grandson is the politician, Tiit Made. (Wikipedia)