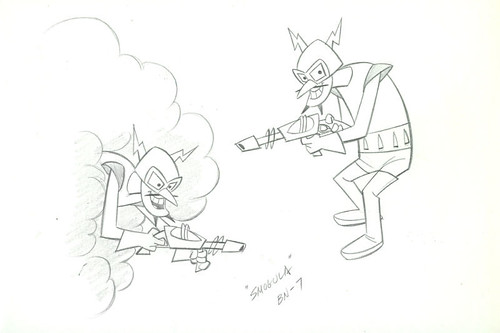 This is one of the original Production MODEL (Pencil Drawings) that was used to DESIGN THE ART that appeared under the camera during
the production filming of the original Television Commercial.

NOTE: THIS IS AN ORIGINAL; NOT A MASS PRODUCED LIMITED EDITION

The Impossibles was a series of animated cartoons produced by Hanna-Barbera in 1966 and aired on American television by CBS. The series of shorts (6 minutes) appeared as part of Frankenstein Jr. and The Impossibles.
The Impossibles were a trio of rock and roll musicians. When contacted by "Big D" (voiced by Paul Frees) about criminal activities in Empire City, they became superheroes. Like the Monkees, the group’s appearance (in their musician form) was based on 1960s pop star stereotypes, which included somewhat long hair, brightly colored (and matching) outfits, high-heeled boots, screaming female fans and, unlike the Monkees, no percussion or bass instruments. Nothing is known about their personal lives, although Fluid Man once mentioned having an Aunt Tilly. They seemed to have secret identities though even a little child would have no trouble connecting the singing Impossibles to the hero Impossibles on appearance alone. They also seemed to change to their "secret identities" in front of the crowds they were playing to when given a mission.
Impossibles

In their guise as musicians, The Impossibles played their futuristic-looking guitars atop an equally futuristic bandstand that could convert into a car which, in turn, could transform into either a van, a submarine or boat which did not need a driver. Their standard catch cry, when called into action, was "Rally ho!" Their humorous dialogue was peppered with puns. As with many Hanna-Barbera characters, The Impossibles were very loosely styled after an existing famous trio, in this case The Three Stooges. Each member of The Impossibles had specific superhuman powers:

Coil Man (voiced by Hal Smith) – Seemingly the group’s leader, short, blond Coily could transform his limbs into impossibly stretchable springs, with his human arms and legs becoming coiled springs, allowing him to bounce to avoid attacks, deliver long-ranged punches and drill through walls. Coil Man usually drove the Impossijet, and his guitar contained a small TV receiver through which "Big D" could contact the group and deliver orders (Big D used Multi Man’s guitar in "The Fiendish Dr Futuro," "Beamatron," and "The Diabolical Dauber"). Coil Man’s costume was purple and pink and included a crested helmet. He could be held in place by a magnet, implying that he was at least partially made of metal.
Fluid Man (voiced by Paul Frees) – Dark-haired Fluid Man, aka Fluey, could morph parts of his body into a liquid form, a talent perfect for sneaking up on an enemy though a water faucet. He could also vapor himself into a cloud or storm. His costume resembled a green wetsuit and swimfins. He could however be soaked up and trapped by a sponge, or frozen solid inside a block of ice.
Multi Man (voiced by Don Messick) – Multi could create infinite duplicates of himself which were often destroyed, leaving only the original behind. His duplicates rarely, if ever, functioned independently, and were often used as camouflage, a bluff, for extra strength or transportation (he could fly by continuously creating replicas above himself). When duplicating himself, he could push tons of rocks out of the way or crack the solid concrete he and the others were entombed in. The character had orange hair covering his eyes and occasionally held a shield for what seems decorative reasons, though he has used it at least twice. In one instance, Multi repelled bullets with his bare hand (Fero, the Fiendish Fiddler), however it may be the shield was supposed to have been used but was accidentally left undrawn. Multi Man’s angular, red and black costume included a short, red cape. A physical trait that he shared with many of his contemporaries in cartoons and comics was a mop of orange hair that entirely covered his eyes. Favourite saying: "But you missed the original".
Villains
The Impossibles faced many bizarre villains, similar to those Batman and Superman had to face:

The Artful Archer – A supervillain who was dressed like Robin Hood; decided to take up being a musician.
Cronella Critch – A witch who was robbing a charity-for-orphans party. She was turned into a cat due to a spell reversal by Multi-Man.
Dr. Futuro – A villain from the 40th century, who travelled to the 1960s in order to steal a gold brick to finance his crimes. He accidentally ran into an age-reversing machine, and was turned into a baby.
An ad for the Saturday morning cartoon lineup in comic books of the time referred to "the Bubbler," "Bratfink," and "The Sponge".

Previous Agatha Christie Nile Cruise Tour – All Aboard the Steam Ship Sudan, the Boat Used in Death on the Nile!
Next 9 Things to do in Jericoacoara, Brazil