The rooftops of Bordeaux 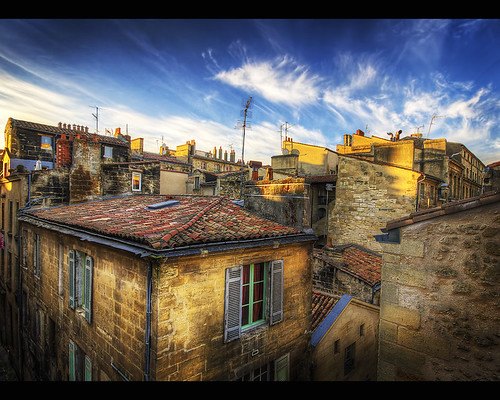 International Ghost Hunters have twice asked to film in this house. Built originally in 1123, it was home to the monks of Paunat Monastery. Guests have reported on numerous occasions of hearing chanting at night echoing quietly through the hallways. Even reports of a headless figure have emerged.

I don’t believe in ghosts, but I do believe in scary little faces in the dark, of which there are many in this house. The owner’s mother loved making dolls. She had a particular liking for ugly/scary faced dolls. They stare at you from every corner of this enchanting place.

It’s such an eclectic place. It actually reminds me of the witch’s house in the Hansel and Gretel story. 3 untamed, black cats stalk around the garden in the evening, adding to the mystery of this already fantastical scene. Remains of ancient buildings sit in the back garden. One of these buildings was a bread house, and leaning over the wall (the ceiling collapsed 3o years ago), the deep, black opening of the bread oven is still easily visible.

Hopefully I’ll be able to publish a photo of the house tomorrow.

Today’s Photo – the rooftops of Bordeaux

This is the view from our Moulin-Rouge apartment in Bordeaux. It had so much character. We contemplated living here at the future.

Previous 20 amazing things to do in Kyoto
Next Classic Colombia: Viva Cartagena, the ‘Heroic City’ of history and culture