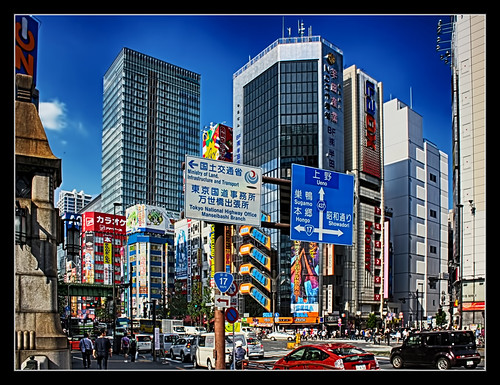 Akihabara is a district in the Chiyoda ward of Tokyo, Japan. The name Akihabara is a shortening of Akibagahara (autumn leaf field), which ultimately comes from Akiba, named after a fire-controlling deity for a firefighting shrine built after the area was destroyed by a fire in 1869.

Nowadays, Akihabara is considered by many to be an otaku cultural center and a shopping district for video games, anime, manga, and computer goods. Icons from popular anime and manga are displayed prominently on the shops in the area, and numerous maid cafés are found throughout the district.

The area that is now Akihabara was once near a city gate of Edo and served as a passage between the city and northwestern Japan. This made the region a home to many craftsmen and tradesmen, as well as some low class samurai. One of Tokyo’s frequent fires destroyed the area in 1869, and the people decided to replace the buildings of the area with a shrine called Chinkasha, meaning fire extinguisher shrine, in an attempt to prevent the spread of future fires. The locals nicknamed the shrine Akiba after a deity that could control fire, and the area around it became known as Akibagahara and later Akihabara.

In 1890, the Akihabara Station became a major freight transit point, which allowed a vegetable and fruit market to spring up in the district. Then, in the 1920s, the station saw a large volume of passengers after opening for public transport, and after World War II, the black market thrived in the absence of a strong government. This disconnection of Akihabara from government authority has allowed the district to grow as a market city and given rise to an excellent atmosphere for entrepreneurship. In the 1930s, this climate turned Akihabara into a future-oriented market region specializing in household electronics, such as washing machines, refrigerators, televisions, and stereos, earning Akihabara the nickname "Electric Town".

As household electronics began to lose their futuristic appeal in about the 1980s, the shops of Akihabara shifted their focus to home computers at a time when they were only used by specialists and hobbyists. This new specialization brought in a new type of consumer, computer nerds or otaku.

The market in Akihabara naturally latched onto their new customer base that was focused on anime, manga, and video games. The connection between Akihabara and otaku has survived and grown to the point that the region is now known worldwide as a center for otaku culture, and most otaku even consider Akihabara to be a sacred place.

Previous TBILISI CITY PHOTOGRAPHY
Next Hello Instagram: 9 Photos you have to take in South America