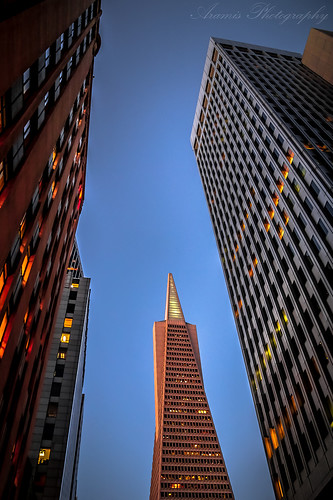 The Transamerica building was commissioned by Transamerica CEO John (Jack) R. Beckett, with the claim that he wished to allow light in the street below. Built on the site of the historic Montgomery Block, it has a structural height of 853 ft (260 m) and has 48 floors of retail and office space.
Construction began in 1969 and finished in 1972, and was overseen by San Francisco-based contractor Dinwiddie Construction (now Hathaway Dinwiddie Construction Company). Transamerica moved its headquarters to the new building from across the street, where it had been based in another flatiron-shaped building now occupied by the Church of Scientology of San Francisco.
Although the tower is no longer Transamerica Corporation headquarters, it is still associated with the company and is depicted in the company’s logo. The building is evocative of San Francisco and has become one of the many symbols of the city. Designed by architect William Pereira, it faced opposition during planning and construction and was sometimes referred to by detractors as "Pereira’s Prick". John King of the San Francisco Chronicle summed up the improved opinion of the building in 2009 as "an architectural icon of the best sort – one that fits its location and gets better with age."
The Transamerica Pyramid was the tallest skyscraper west of Chicago from 1972 to 1974 surpassing the then Bank of America Center. It was surpassed by the Aon Center in Los Angeles.
The building is thought to have been the intended target of a foiled terrorist attack, involving the hijacking of airplanes as part of the Bojinka plot, which was foiled in 1995.
In 1999 Transamerica was acquired by Dutch insurance company Aegon. When the non-insurance operations of Transamerica were later sold to GE Capital, Aegon retained the building as an investment.