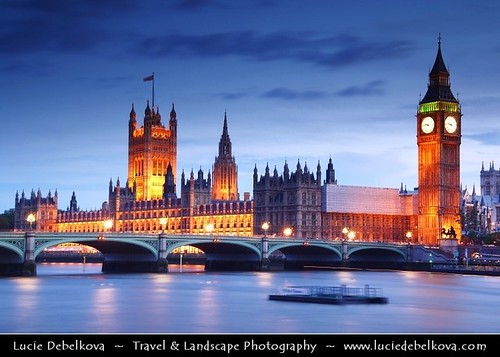 The Palace of Westminster, also known as the Houses of Parliament or Westminster Palace, is the meeting place of the two houses of the Parliament of the United Kingdom—the House of Lords and the House of Commons. It lies on the north bank of the River Thames in the heart of the London borough of the City of Westminster, close to the historic Westminster Abbey and the government buildings of Whitehall and Downing Street. The name may refer to either of two structures: the Old Palace, a medieval building complex most of which was destroyed in 1834, and its replacement New Palace that stands today; it has retained its original style and status as a royal residence for ceremonial purposes.

Big Ben is the nickname for the great bell of the clock at the north end of the Palace of Westminster in London, and is often extended to refer to the clock or the clock tower as well.

All images are exclusive property and may not be copied, downloaded, reproduced, transmitted, manipulated or used in any way without expressed, written permission of the photographer.