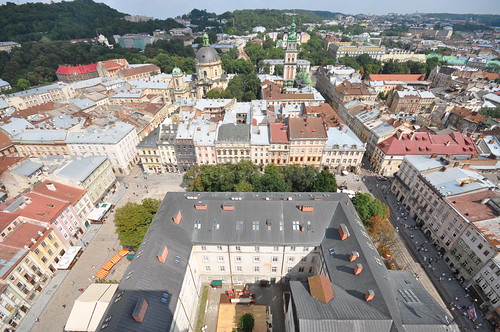 The Rynok Square in Lviv is a central square of the city of Lviv, Ukraine. It was planned in the second half of the 14th century, following granting city rights by Polish king Casimir III, who annexed Red Ruthenia. The king ordered Lviv to be moved more to the south, where a new city was built to the plan of a traditional European settlement: a central square surrounded by living quarters and fortifications. Old, Ruthenian Lviv had become a suburb of the new city.

The square is rectangular in shape, with measurements of 142 meters by 129 meters and with two streets radiating out of every corner. In the middle there was a row of houses, with its southern wall made by the Town Hall. However, when in 1825 the tower of the Town Hall burned, all adjacent houses were demolished and a new hall, with a 65-meter tower, was built in 1835 by architects J. Markl and F. Trescher.

Around the square, there are 44 tenement houses, which represent several architectural styles, from Renaissance to Modernism. In the four corners, there are fountains—wells from 1793, probably designed by Hartman Witwer. The sculptures represent four Greek mythological figures: Neptune, Diana, Amphitrite and Adonis. In front of the Town Hall, there was a pillory. In 1998 the Market Place, together with the historic city center of Lviv, was recognized as a UNESCO world heritage site

Visible on the picture, the following houses on the easter side of the square:

– Number 2. Bandinelli Palace. Built in late Renaissance style in 1593. It was the property of Roberto Bandinelli from Florence, the person who founded first mail office in Lviv in 1629. Remodelled in 1737–1739, after World War II it was in ruins. Recently renovated. Among persons who lived here, there was a Polish poet Kornel Ujejski.

– Number 3. House of the Wilczek Family. A Rococo-style house, remodeled between 1771 and 1772. It owes its name to first owners.

– Number 4. Black House. One of the most famous buildings of the square and one of the most beautiful examples of renaissance architecture in Lviv. It was built at the end of the 16th century for Italian tax-collector Tomas Alberti. The front elevation of the house is created from sandstone, which darkened through the years, making it architecturally significant. Since 1926 it has been part of the Historic City Museum.

– Number 5. House of Lukasiewicz. Built in the 16th century by Piotr Krasowski.

– Number 6. King John III Sobieski Palace, also called Little Wawel. It was originally built in 1580, for a Greek merchant Konstanty Korniakt, hence it is sometimes called The Palace of the Korniakts.[2] In 1640, it was purchased by Jakub Sobieski and inherited by King John III Sobieski. The Polish-Lithuanian ruler remodelled it into a palace-style residence, with spacious rooms and an audience hall. Sobieski’s house is made of two earlier, Gothic buildings joined together. Since 1908, a historical museum of the city has been located here. It is now part of the Lviv History Museum, with the Royal Chambers. They preserve and exhibit historical valuables: 18th-century furniture and clocks, silver artefacts, a collection of decorations, medals, and other items. Apart from Sobieski, another Polish king stayed here, Wladyslaw IV Vasa, who in 1634 got smallpox and recovered here.

– Number 8. House of Bernatowicz, with an Empire style facade.

– Number 9. Archbishop’s Palace. It was property of Lviv Roman Catholic Archbishops. Among its guests, there were several Polish kings and nobles. In 1634 it was thoroughly remodelled by Archbishop Stanislaw Grochowski. Here, on 10 November 1673, died King Michael Korybut Wisniowiecki. In 1845, a second floor was added and the house was turned into a condominium. Polish kings Sigismund III Vasa and his son Wladyslaw IV stayed here while in Lviv.

– Number 10. Lubomirski Palace or House of Prosvita. Rococo style, created in 1763 by architect Jan de Witte, for Stanislaw Lubomirski, out of two previously existing buildings. Between 1771 and 1821, it was seat of Austrian governors of Galicia. In the mid-19th century, it was purchased by a Ukrainian organization, Prosvita. Here, on 30 June 1941, Yaroslav Stetsko proclaimed Ukraine’s independence. Currently, there is an exposition of china in the palace.