Warsaw as seen from the Palace of Culture and Science 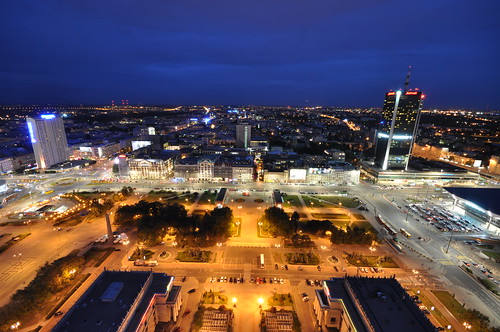 Construction started in 1952 and lasted until 1955. A gift from the Soviet Union to the people of Poland, the tower was constructed, using Soviet plans, almost entirely by 3500 workers from the Soviet Union, of whom 16 died in accidents during the construction. The Soviets were housed at a new suburban complex at Poland’s expense, complete with its own cinema, food court, community centre and swimming pool. The architecture of the building is closely related to several similar skyscrapers built in the Soviet Union of the same era, most notably the Moscow State University. However, the main architect Lev Rudnev incorporated some Polish architectural details into the project by traveling around Poland and seeing the architecture. The monumental walls are headed with pieces of masonry copied from Renaissance houses and palaces of Kraków and Zamość.

Shortly after opening, the building hosted the 5th World Festival of Youth and Students. Many visiting dignitaries toured the Palace, and it also hosted performances by notable international artists, such as a 1967 concert by the Rolling Stones, the first by a major western rock group behind the Iron Curtain. In 1985, it hosted the historic Leonard Cohen concert, surrounded by many political expectations, which were avoided by Cohen in his prolonged introductions during the three-hour show.
Four 6.3-metre clock faces were added to the top of the building ahead of the millennium celebrations in 2000. This briefly made the building the tallest clock tower in the world (it was superseded by the NTT DoCoMo Yoyogi Building, to which a clock was added in 2002, by and Makkah Clock Royal Tower in 2012).

As the city’s most visible landmark, the building was controversial from its inception. Many Poles initially hated the building because they considered it to be a symbol of Soviet domination, and at least some of that negative feeling persists today. Some have also argued that, regardless of its political connotations, the building destroyed the aesthetic balance of the old city and imposed dissonance with other buildings.
The inhabitants of Warsaw still commonly use nicknames to refer to the palace, notably Pekin (Beijing in Polish, because of its abbreviated name PKiN (Pałac Kultury i Nauki), Pajac ("clown", a word that sounds close to Pałac), Stalin’s syringe, the Elephant in Lacy Underwear, or even the Russian Wedding Cake. The terrace on the 30th floor, at 114 metres, is a well-known tourist attraction with a panoramic view of the city. The best view of the city is jokingly said to be from the terrace as it is the one place in the city where the building itself does not obscure the view.
The building currently serves as an exhibition center and office complex. It is 231 metres (757 ft)[1] tall which includes the height of the spire of 43 meters. There are 3288 rooms on 42 floors, with an overall area of 123,000 m², containing cinemas, theatres, museums, offices, bookshops, a large conference hall for 3000 people, and an accredited university, Collegium Civitas on the 11th and 12th floors of the building [Wikipedia.com]