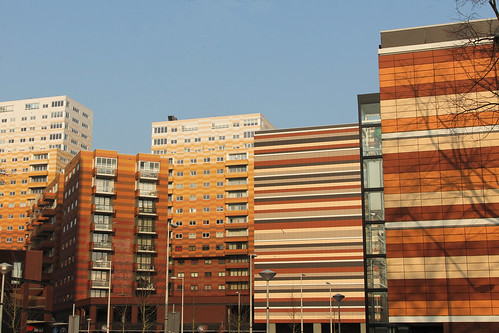 Waterlandplein
The Waterlandplein is a central square and area in Amsterdam North. South of the IJdoornlaan and North of Werengouw. The square is completed late sixties and consisted of high-rise buildings with shops underneath and in between low single store pavilions. The square is named by a decree on October 30, 1963 to the Waterland north of Amsterdam.
In plans for the metro (Metroplan 1968) the perched terminus of the eastern branch of the North-South line on the square was provided. The planned route westwards is still recognizable and undeveloped. The North-South metro line doesn’t have a Western and Eastern branch but just two stations (Noorderpark and Noord near Buikslotermeerplein).
In recent years (since about 2009) they started to renovate the mall which is largely replaced by new buildings. Six residential towers were built with in total 319 properties and 300 indoor parking spaces. The new towers bear the names of lighthouses; Noordtoren, IJdoorn, Brandaris, Bornrif, Vuurduin and Stenen Baak. The existing buildings (De Kijkduin, De Leeuw and De Admiraal were renovated. The new square has been named New Waterlandplein.
[ Source: Wikipedia – Waterlandplein (Dutch) ]