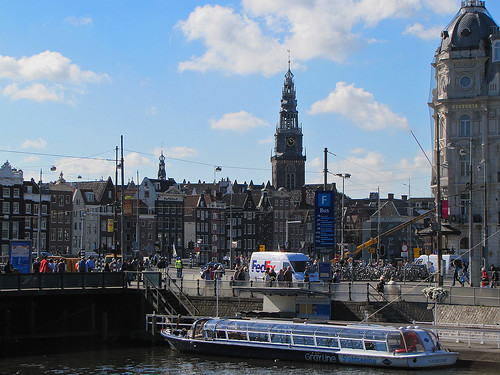 A view of the city, captured near Amsterdam Centraal, the city’s central station, with a canal cruiser in the foreground and the steeple of the Oude Kerk (Old Church) in the background, Amsterdam, Noord-Holland (North Holland), Netherlands

Amsterdam is the capital city of the Kingdom of the Netherlands. Its status as the Dutch capital is mandated by the Constitution of the Netherlands though it is not the seat of the Dutch government, which is The Hague. Amsterdam has a population more than 800,000 within the city-proper, more than 1.1 million in the urban region almost 1.6 million in the greater metropolitan area. The city is located in the province of North Holland in the west of the country. It comprises much of the northern part of the Randstad, one of the larger conurbations in Europe, with a population of approximately 7 million.

The city is sometimes also called "The Venice of the North” because it is home to more than one hundred kilometers of canals. These canals divide Amsterdam into approximately 90 islands which are linked by more than 1,200 bridges. The canals of Amsterdam (mainly from the 17th century) are a UNESCO World Heritage site since 2010 and the Defence Line of Amsterdam is a UNESCO World Heritage site already since 1996.

Amsterdam’s name derives from "Aemstelredamme", indicative of the city’s origin as a dam of the river Amstel. Developing from a small fishing village in the late 12th century, Amsterdam became one of the most important ports in the world during the Dutch Golden Age (17th century), a result of its innovative developments in trade.

Shortly after the floods of 1170 and 1173 locals of the river Amstel vicinity built a bridge over and a dam across the river, hence giving its name to the village: "Aemstelredamme". The earliest recorded use of this name comes from a document dated October 27, 1275. According to this document inhabitants of the village were exempted from paying a bridge toll in the county of Holland by count Floris V. This meant it had been allowed to the inhabitants of the village of Aemstelredamme to travel freely through Holland without having to pay toll at bridges, locks and dams all through the county.

By 1327 the name of the settlement had developed into "Aemsterdam". Already some years earlier, either in 1300 or 1306, Amsterdam was granted city rights. From the 14th century on, Amsterdam flourished, largely because of its trade with the Hanseatic League.

After being reigned by the King of Spain in the first half of the 16th century, the seventeen provinces of the Habsburg Netherlands rebelled against Philip II of Spain and his successors in 1568. The main reasons for the uprising were the imposition of new taxes, the tenth penny, and the religious persecution of Protestants by the Spanish Inquisition. The revolt escalated into the Eighty Years’ War, which ultimately led to Dutch independence. Strongly pushed by Dutch Revolt leader William the Silent, the Dutch Republic became known for its relative religious tolerance. Jews from the Iberian Peninsula, Huguenots from France, prosperous merchants and printers from Flanders, and economic and religious refugees from the Spanish-controlled parts of the Low Countries found safety in Amsterdam.

The 17th century is considered Amsterdam’s Golden Age, during which it became the wealthiest city in the world. Ships sailed from Amsterdam to the Baltic Sea, North America, and Africa, as well as present-day Indonesia, India, Sri Lanka, and Brazil, forming the basis of a worldwide trading network. Amsterdam’s merchants had the largest share in both the Dutch East India Company and the Dutch West India Company. These companies acquired overseas possessions that later became Dutch colonies. At that time Amsterdam was Europe’s most important point for the shipment of goods and also the leading financial centre of the world.

During the 18th and early 19th century Amsterdam’s prosperity declined. The wars of the Dutch Republic with England and France took their toll on Amsterdam. During the Napoleonic Wars, Amsterdam’s significance reached its lowest point, with Holland being absorbed into the French Empire. However, the later establishment of the United Kingdom of the Netherlands in 1815 marked a turning point.

The end of the 19th century is sometimes called Amsterdam’s second Golden Age. New museums, a train station, and the concert hall were built and at this same time, the Industrial Revolution reached the city. The Amsterdam-Rhine Canal was dug to give Amsterdam a direct connection to the Rhine, and the North Sea Canal was dug to give the port a shorter connection to the North Sea. Both projects dramatically improved commerce with the rest of Europe and the world.

Shortly before the First World War, the city expanded and new suburbs were built. Even though the Netherlands remained neutral in this war, Amsterdam suffered a food shortage, and heating fuel became scarce. The shortages sparked riots in which several people were killed. These riots are known as the Aardappeloproer (potato rebellion).

On 10th May 1940 Germany invaded the Netherlands and took control of the country. Some Amsterdam citizens sheltered Jews, thereby exposing themselves and their families to the high risk of being imprisoned or sent to concentration camps. More than 100,000 Dutch Jews were deported to Nazi concentration camps of which some 60.000 lived in Amsterdam. The most famous deportee was the young Jewish girl Anne Frank, who died in Bergen-Belsen.

In the years after the Second World War many new suburbs, such as Osdorp, Slotervaart, Slotermeer, and Geuzenveld, were built. After plans were made to redesign the whole city centre, which had fallen into disrepair, and to a minor degree were also implemented, many residents expressed their fury about the demolition caused by the restructuring of the city. As a result, the demolition was stopped and Amsterdam kept its beautiful mainly Renaissance appearance.

But Amsterdam is not only popular with tourists and residents alike due to its lovely cityscape, but also because of its laxity in regard to sex and drugs. Amsterdam’s red-light districts attract multitudes of visitors and the numerous coffee shops all over the city, where you can buy weed and hashish, are also always well-frequented.